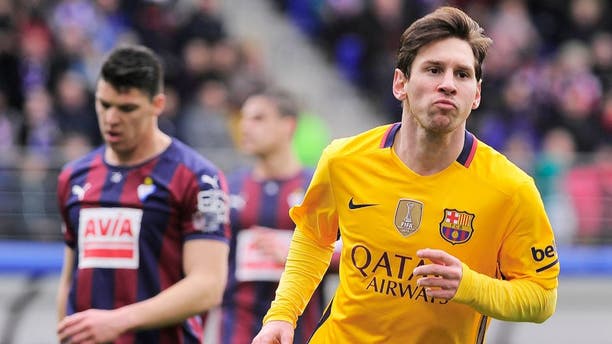 CORRECTION - Barcelona's Argentinian forward Lionel Messi (R) celebrates after scoring during the Spanish league football match SD Eibar vs FC Barcelona at the Ipurua stadium in Eibar on March 6, 2016. / AFP / ANDER GILLENEA / The erroneous mention[s] appearing in the metadata of this photo by ANDER GILLENEA has been modified in AFP systems in the following manner: [ADDING CODE FOR LIVE REPORT]. Please immediately remove the erroneous mention[s] from all your online services and delete it (them) from your servers. If you have been authorized by AFP to distribute it (them) to third parties, please ensure that the same actions are carried out by them. Failure to promptly comply with these instructions will entail liability on your part for any continued or post notification usage. Therefore we thank you very much for all your attention and prompt action. We are sorry for the inconvenience this notification may cause and remain at your disposal for any further information you may require. (Photo credit should read ANDER GILLENEA/AFP/Getty Images)

Lionel Messi continued his impressive run by scoring two goals in Barcelona's 4-0 win over Eibar on Sunday, keeping his team unbeaten and maintaining a comfortable lead entering the final stretch of the Spanish league.

Messi scored with a great run in the 42nd and added a penalty in the 76th, giving Barcelona a provisional 11-point advantage over Atletico Madrid, which plays at Valencia later Sunday.

Messi has scored 15 goals in the last 10 matches, and eight in the past four.

Munir El Haddadi opened the scoring in the eighth minute after a cross by Luis Suarez, who netted his league-leading 26th goal in the 84th.

It was Barcelona's 11th straight win in the league. The Catalan club hasn't lost in 36 consecutive games in all competitions.