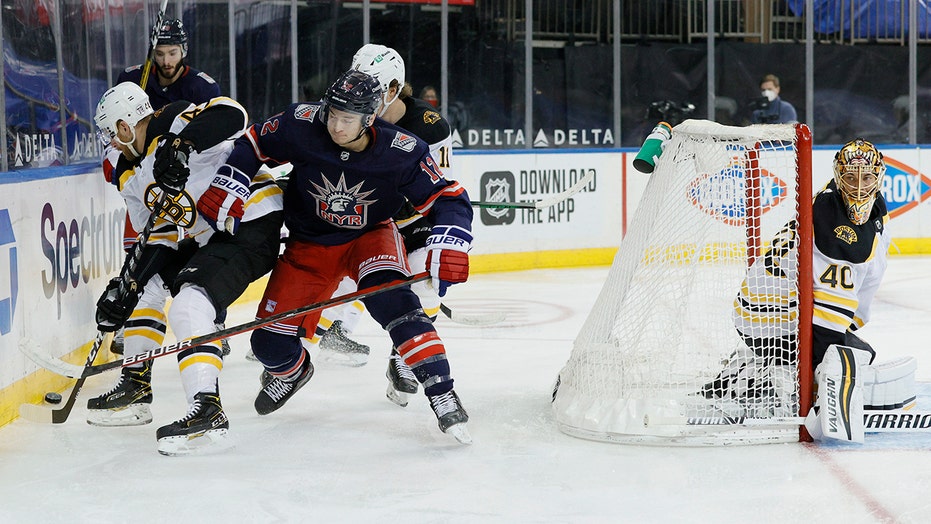 Charlie McAvoy had a goal and an assist, leading the Boston Bruins to a 4-1 win against the New York Rangers on Sunday.

Alexandar Georgiev made 31 saves, but the Rangers fell for the second time in games. Colin Blackwell scored for New York.

McAvoy hammered a one-timer to push the Bruins’ lead to 3-0 at 10:20 of the second period. Pastrnak and Brad Marchand assisted on the play.

The Bruins and Rangers have met four times in the month of February this season, all at MSG. The teams are scheduled to play four more times at TD Garden in Boston during this abbreviated 56-game season with revamped divisions because of COVID-19.

Coyle opened the scoring at 6:41 of the first period with a deft wrist shot from inside the left faceoff circle. Pastrnak’s leading pass allowed Coyle to enter the offensive zone with speed and get by Rangers rookie defenseman K’Andre Miller. McAvoy earned the secondary assist on the play.

Before Coyle’s goal, Georgiev sustained a cut above his left eye following a collision with Bruins forward Nick Ritchie. Igor Shesterkin replaced Georgiev after the goal for the remainder of the first period. Georgiev returned for the second period and finished the game.

Frederic extended the Bruins’ lead to 2-0 late in the first period when he redirected a puck past Shesterkin. Connor Clifton and Jack Studnicka assisted on the goal at 18:14 of the opening period.

Blackwell spoiled Rask’s shutout bid at 10:47 of the third period. Alexis Lafreniere, the first overall selection of the 2020 draft, picked up his second career assist in as many games on the play.

Coyle added a short-handed empty-net goal at 18:05 to seal the victory for the Bruins.

The Bruins are 3 for 22 on the man advantage over their past nine games after going 12 for 34 over the first 10.