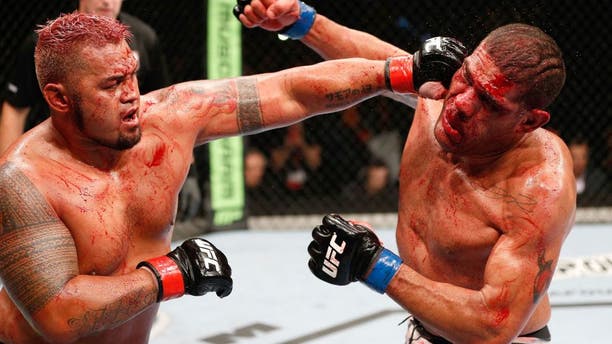 Mark Hunt has relatively recent losses to the likes of former champion Junior Dos Santos, current title-holder Fabricio Werdum, and number one challenger Stipe Miocic. After two-straight KO wins over Frank Mir and Antonio Silva, the 42-year-old doesn't have many guys between him and another title shot.

If he has his way, he'll get rematches with all of the above men, sooner rather than later. "I want my rematch with those guys," he told the MMA Hour this week.

"That fight with Stipe taught me a big lesson -- never to be so much overweight before the fight. It was a problem. So, I won't be doing that, again."

Hunt has looked much leaner in his last two outings, so he may very well have turned over a new leaf with regards to his diet. Hunt would love to avenge losses, but he's fine with fighting anyone in the UFC heavyweight division's top-five next.

"Any of them is fine," Hunt said. "Any of the top-five guys would be fine."

The "Super Samoan" isn't picky about who he wants to fight, next, but he wouldn't mind getting back in the cage real soon. In fact, he has his eye on the big heavyweight bouts coming up, like Junior Dos Santos vs. Ben Rothwell and Werdum vs. Miocic.