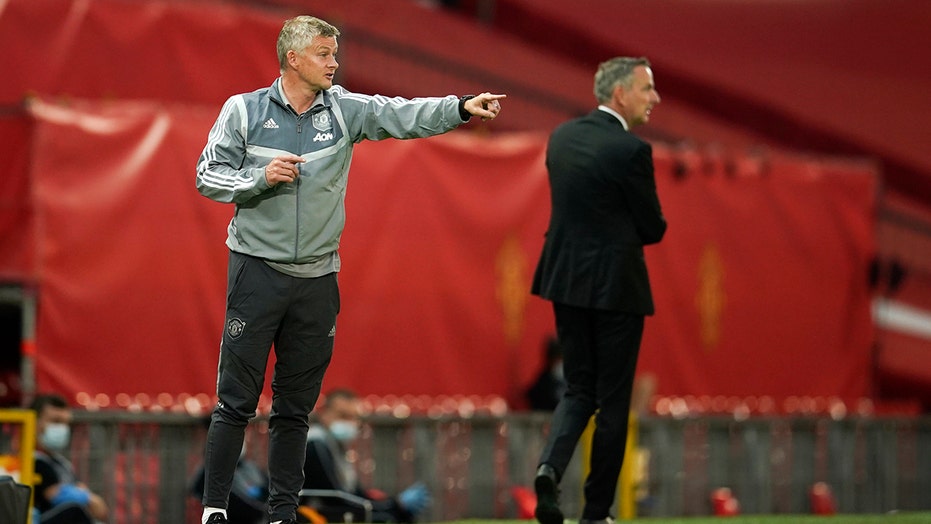 The Europa League will set up a reunion for Manchester United manager Ole Gunnar Solskjaer as he takes on an old friend in the quarterfinals.

When Solskjaer's team faces Copenhagen in Cologne on Monday, the opposing coach will be his old Norway teammate Stale Solbakken.

The two played at the 1998 World Cup when Norway reached the last 16 and beat Brazil along the way. The Norwegian team was bursting with talent then but hasn't qualified for a World Cup since.

“I used to play with Stale Solbakken and he’s a good friend of mine — we’ve been in touch before today. We wished each other good luck and said hope to see you in Germany. They did their job, we did our job, so on to the next one," Solskjaer said Wednesday, according to UEFA.

“Stale's teams are always well organised and difficult to play against. Very talented young players with experience. He’s done fantastic in building team after team and it’s going to be a difficult one.”

United will be the overwhelming favorite, but Copenhagen and Solbakken have sprung surprises before. During his first spell as Copenhagen coach in 2006, Solbakken led the team to a 1-0 victory over United in the Champions League group stage.

Solskjaer was on the field for United that day alongside Wayne Rooney in attack, with a 21-year-old Cristiano Ronaldo on the flank.

Solbakken has an unhappy history with another team in the quarterfinals. His six months as coach of Wolverhampton in 2012-13 were a far cry from its European successes this season.

Back then Solbakken's team flirted with relegation from the second-tier championship and he was dismissed after just six months in charge. That paved the way for Solbakken to join Copenhagen seven months later and he's stayed ever since.

Wolves take on five-time Europa League winner Sevilla on Tuesday in their biggest European game since losing the 1972 UEFA Cup final to Tottenham.

It's been a long road for Wolves, who started the Europa League in the second qualifying round in July 2019 against Northern Irish club Crusaders.

“This goal means everything. It’s everything we were going through, for the whole season. Since the beginning we were training, we were working hard,” striker Raul Jimenez said Thursday after scoring the winning penalty against Olympiakos.

“We started the Europa League in the qualification rounds and have had a big, big season, but we have to keep going.”

For Bayer Leverkusen, the Europa League tournament on home soil offers a golden chance to shed its nickname of “Neverkusen.”

Five times the Bundesliga runner-up and never the champion, and the losing finalist to Real Madrid in the 2002 Champions League final, Leverkusen has a reputation for falling just short of success. It has history in this competition though, beating Espanyol on penalties in 1988 in the final of what was then called the UEFA Cup.

Winning the trophy would put Leverkusen back in the Champions League for 2020-21 after it missed out by two points in June.

It's now or never for Kai Havertz too. The Leverkusen forward has been linked with a move to Chelsea, so each game in the Europa League could be his last for the club he joined at the age of 11. He hit the bar and put another shot just wide as Leverkusen defeated Rangers in the round of 16.

The draw hasn’t made that easy, pitting Leverkusen against Inter Milan in the quarterfinal Tuesday. Inter is aiming to cap its recent resurgence with its first trophy in nine years. No Italian club has won this competition since Parma won the UEFA Cup in 1999.