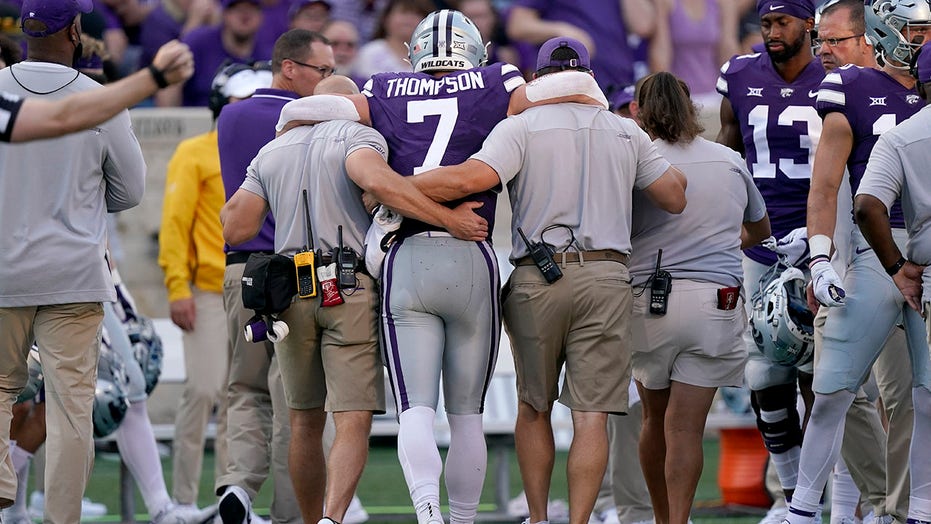 The most experienced quarterbacks in the Big 12 have already been sidelined this season for very different reasons.

Skylar Thompson was off to good start in his sixth year in Kansas State's program before a knee injury that will keep him out indefinitely. Fourth-year Iowa State starter Brock Purdy was benched in the fourth quarter of the biggest home game in program history, though coach Matt Campbell has since reiterated his "great trust" in the quarterback.

All of that is through only two games this season and the unexpected changes at the game's most important position stretch beyond the Big 12.

When starting quarterback JT Daniels was out for second-ranked Georgia with an oblique injury, backup Stetson Bennett stepped in and tied a school record with five TD passes in the first half. No. 7 Texas A&M will be without redshirt freshman quarterback Haynes King indefinitely after surgery to repair his broken right leg. Boston College's Phil Jurkovec could miss the rest of the season after hand surgery.

Skylar Thompson took advantage of the extra year of eligibility given to all players because of the pandemic after missing most of last season with a right shoulder injury. He lowered his left shoulder and bulled into the end zone while running for K-State's first TD in a season-opening win over Stanford, then led the Wildcats to a quick TD in their second game and was on the brink of another when he suddenly crumbled to the ground.

"See him go down and it’s always gonna be a shell shock because that’s a great guy and a great player for us," said running back Deuce Vaughn, who was behind the quarterback when he got hurt rolling to the right.

Wildcats coach Chris Klieman said the injury isn't believed to be season-ending, but called it "frustrating because it’s like it’s not fair. Why does it happen to somebody two years in a row?" Thompson's 32 career starts are tied for the most in school history.

Will Howard has been pressed into the starting role again like he was a freshman last year. He went through all of last spring with the No. 1 offense while Thompson was still rehabbing his throwing shoulder.

Iowa State had turnovers on three consecutive drives, including two interceptions by Purdy, and were down by 17 points early in the fourth quarter of its highly anticipated home game against instate rival Iowa when Campbell put second-year freshman QB Hunter Dekkers in.

The 27-17 loss dropped the Cyclones, last season's Big 12 runner-up, five spots to No. 14 in the new AP poll. Purdy, still without a TD pass, is anticipated to be back under center when Iowa State plays at UNLV on Saturday night.

"Brock and I have a great relationship and really he's got great trust in who we are," Campbell said. "Equally, we have great trust of who he is."

Most Texas fans assumed Casey Thompson would be the easy choice as the 2021 starter when he came off the bench to throw four TDs in eight passes in the Alamo Bowl win over Colorado last December before Sarkisian was hired. But the fourth-year player couldn’t shake off the spring and summer training camp competition with Card.

After a solid opening win over then-No. 23 Louisiana-Lafayette, the Longhorns got overrun 40-21 by former SWC rival and future SEC foe Arkansas, and got knocked out of the AP poll from 15th.

"You could tell early on Hudson was a little rattled," Texas linebacker DeMarvion Overshown said.

Thompson led two TD drives against Arkansas after getting in the third quarter when Texas was already far behind. His first start since still in high school in November 2017 is set for Saturday against Rice. He considered transferring from Texas after the 2018 season, but stayed and spent two seasons as Sam Ehlinger's top backup. Thompson said he didn’t consider leaving when Card was named the starter two weeks ago.

"At this point, I’m already in this thing, I’ve waited so long," Thompson said Tuesday. "There was no way I could just quit and let up at this point."

After throwing for 3,031 yards and 28 TDs last season, Oklahoma sophomore and preseason AP All-America quarterback Spencer Rattler is off to a solid start. He has completed 50 of 65 passes for 547 yards with six touchdowns and two interceptions for the No. 3 Sooners (2-0).

Two former Sooners quarterbacks will start against each other Saturday, when Tanner Mordecai and SMU play at Louisiana Tech and Austin Kendall. They were OU teammates during the 2018 season.

"It’s awesome to see," Sooners coach Lincoln Riley said. "It’s not surprising to me. ... No doubt in my mind those guys were starting-caliber players."

Mordecai, a fourth-year sophomore, has thrown for 629 yards and 11 TDs in two games for SMU, only 10 yards fewer than he had combined in his 12 appearances for the Sooners the past three years. Kendall is a sixth-year senior who was at West Virginia the past two seasons after two seasons at Oklahoma.