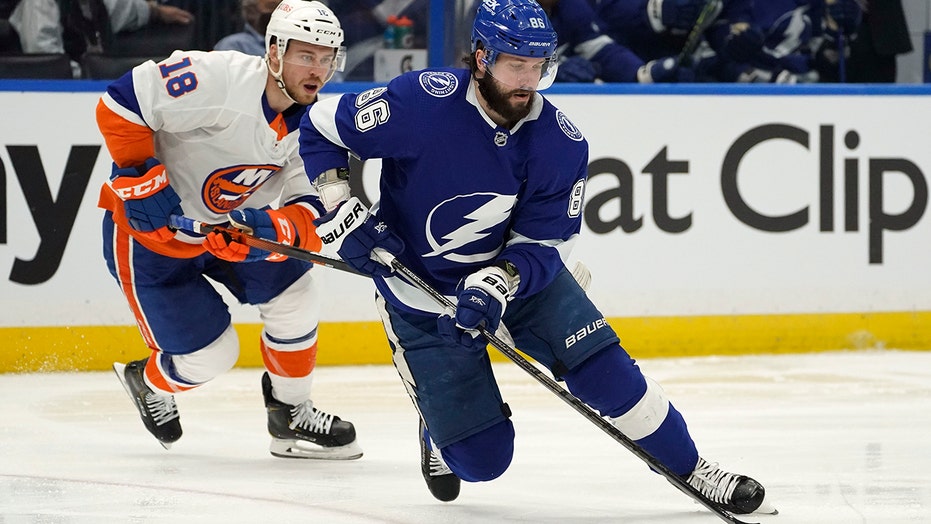 Nikita Kucherov would have much rather ground through the season with his Tampa Bay Lightning teammates than sit out all 56 games while recovering from hip surgery.

"Missing a whole year, you ask any player, you don’t want to be that guy," Kucherov said.

Kucherov was that guy. The leading scorer on Tampa Bay's 2020 Stanley Cup run didn't play a game after he hoisted that trophy in September until mid-May, when the playoffs began.

In between, the Lightning were able to get an exemption for Kucherov's salary cap hit, which allowed them to keep their core group of players together and — with some gymnastics — even add an important player at the trade deadline.

It all meant that Kucherov was back for the opening game of the playoffs, when the collective bargaining agreement that has been in place since 2005 stipulates the cap does not count because players only draw salaries during the regular season. He now leads all scorers in the postseason as the stacked Lightning try to win back-to-back titles.

"Sometimes the stars align for you," general manager Julien BriseBois said. "I didn’t know how things would unfold. Luckily for me and for our organization, I don’t think they could have unfolded any better."

It didn't unfold so well for the Florida Panthers, who lost to Tampa Bay in six games in the first round, or the Carolina Hurricanes, who were ousted 4-1 in the second.

"We had a great season," Carolina defenseman Dougie Hamilton said. "We lost to a team that’s $18 million over the cap or whatever they are, unbelievable goalie and all that stuff. We played them pretty close."

That is not necessarily a complaint by Hamilton but rather his way of expressing how steep the climb was for the Hurricanes against the Lightning. Members of the Panthers and now the New York Islanders, who are facing the Lightning in the semifinals, have been careful not to make Kucherov's situation a point of contention.

"I’m not a ‘capologist,’ I’m a coach, but I can tell you that Kucherov is a tremendous player," Islanders coach Barry Trotz said. "His skill set is off the charts. He’s got a lot of deception, his release. There’s so many dangerous aspects that he's one of the superstars in the league."

New York GM Lou Lamoriello chose to echo Trotz, saying of Kucherov: "He’s a tremendous hockey player. I don’t think you need to say anymore. Certainly his past and his success speaks for itself."

Florida coach Joel Quenneville during the first round went even further about the Panthers "not complaining" about Kucherov.

"It’s the way it is," Quenneville said. "That's one of the rules, and you deal with it. He was a big part of their team last year. Not like he hasn’t been around them, so that’s where it’s at, so there’s no complaint here."

Quenneville's Chicago Blackhawks did something similar with Patrick Kane in 2015, putting him on long-term injured reserve during the season and making moves at the deadline to gear up for another Cup run. Kane, like Kucherov, was back for Game 1 of the playoffs and tied for the lead in scoring on the way to Chicago's third championship in six years.

There were grumbles then about cap circumvention, and the NHL investigated the Lightning this time. Deputy Commissioner Bill Daly said the league looked at Kucherov's injury prognosis, the nature of the injury and its treatment and concluded there was "no issue."

In fact, the Lightning still contend Kucherov came back earlier than anticipated.

"It just so happened that this season, because of the extraordinary circumstances, this regular season was only lasting four months," BriseBois said. "He was able to have surgery, miss the entire season, we got some cap relief during the season and he was able to come back a little sooner than expected, and it so happened that that coincided with Game 1 of the playoffs."

Kucherov said it took a couple of games to get his legs under him after missing so much time. Still, his 19 points through 12 games were five more than the next-closest player this postseason, and it looks like the 2019 NHL MVP hasn't missed a beat.

"To come in to the situation he did at such an intense game at such a high level and be able to perform the way he did is remarkable," Lightning coach Jon Cooper said. "But he's a remarkable player, and you can count on one hand the guys that you could make an argument for best player in the league. He’s one of them."

Similar to Kane six years ago, it is why there is now some buzz about closing the long-term injury loophole and preventing similar situations. But executives around the league know it could be them next time. And, as Kucherov points out about his injury and surgery: "I didn't do it on purpose."

"I didn’t make the rules, whether it’s cap space or something like that," he said. "I had to do the surgery, and I had to go through the whole five months of rehabilitation, and when the time came I was ready to play, it was the playoffs."