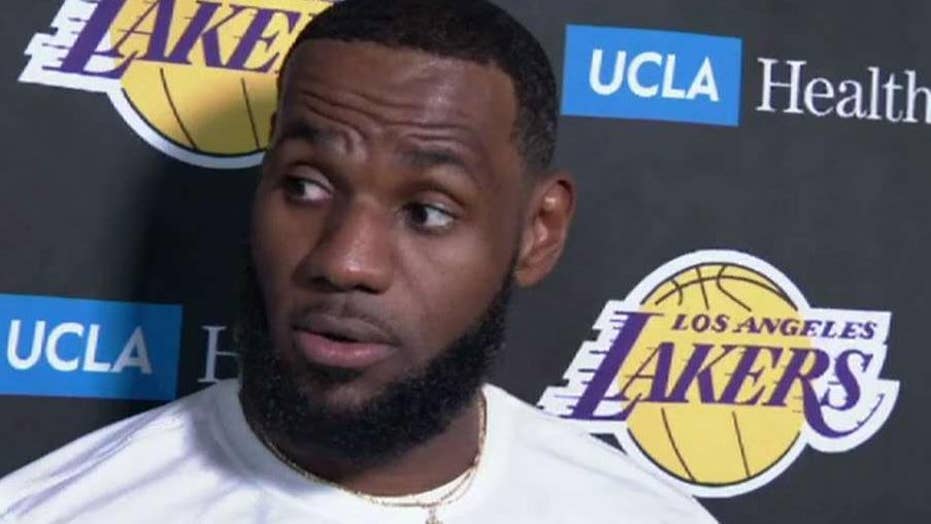 NBA superstar LeBron James is under fire for saying Houston Rockets GM Daryl Morey was not 'educated' on the China-Hong Kong situation before tweeting his support for pro-democracy protesters.

NBA superstar LeBron James was skewered Monday night after he criticized as "misinformed" a general manager's tweet supporting Hong Kong's ongoing pro-democracy protests — and then doubled down in a damage control tweet, saying the online show of support for the embattled demonstrators "could have waited a week."

James, who's considered one of the more outspoken athletes on social justice issues in a league that prides itself on being one of the most progressive in sports, was uncharacteristically deferential to NBA and Chinese leadership in his remarks about Houston Rockets GM Daryl Morey's tweet of a slogan – "Fight for freedom. Stand with Hong Kong" – expressing support for those marching in Hong Kong.

The single tweet from Morey's personal account was soon deleted, but not before spurring a rebuke from some within the NBA and inciting a backlash in China. Authorities in the communist country last week canceled publicity events and news conferences and banned the broadcast last week of an exhibition game between the Brooklyn Nets and James' Los Angeles Lakers.

“I’m not here to judge how the league handled the situation," the perennial All-Star told reporters in Los Angeles on Monday night. "I just think that, when you’re misinformed or you’re not educated about something – and I’m just talking about the tweet itself – you never know the ramifications that can happen. We all see what that did, not only did for our league but for all of us in America, for people in China as well. Sometimes you have to think through the things that you say that may cause harm not only for yourself but for the majority of people. I think that’s just a prime example of that.”

James' take was swiftly denounced across the board on social media, prompting him to take to Twitter in a bid to stem the mounting criticism. He stressed that his assessment had nothing to do with the "substance" of Morey's tweet and solely focused on the timing of the post.

"My team and this league just went through a difficult week," James wrote. "I think people need to understand what a tweet or statement can do to others. And I believe nobody stopped and considered what would happen. Could have waited a week to send it."

But his attempt to mitigate any negative reaction was also met with disapproval, with some critics lambasting his description of "a difficult week" by noting the hardships protesters are confronting in their fight to keep autonomous Hong Kong free from Beijing's grip.

"Having just been in Hong Kong – on the streets & with the protestors – this kind of garbage is hard to take," Sen. Josh Hawley, R-Mo., tweeted. "LeBron, are YOU educated on 'the situation'? Why don’t you go to Hong Kong? Why don’t you meet the people there risking their lives for their most basic liberties."

Hawley added: "This statement is unbelievable. 'So many people could have been harmed'? By Daryl Morey daring to express sympathy for democracy? News flash: people ARE being harmed - shot, beaten, gassed - right now in Hong Kong. By China. By the Communist Party the NBA is so eager to appease."

Dan Wolken, a writer for USA Today, wrote a column calling the episode the most “disgraceful moment" of  James' career.

“If only Morey had done what you did Monday, LeBron, and tacitly admit that the only thing that really matters is your ability to sell shoes and market 'Space Jam 2' in a country of 1.4 billion, we could have had an intellectually honest discussion about doing business in China and the cost of free speech in a country where only propaganda is tolerated,” he wrote.

Other social media users posted videos of the violent protests in the city and called out the superstar for what they saw as James' self-serving attempt to not offend the lucrative Chinese market.

"No more King James, Chairman James from now on," one user wrote.

Before wading into the Hong Kong controversy, James had been vocally supportive of social justice causes. On his HBO discussion show, "The Shop," James in March discussed his respect for former NFL quarterback Colin Kaepernick, who started the trend of taking a knee during the national anthem to draw attention to perceived racial biases in the justice system. But Kaepernick soon found himself without a job, as NFL franchises uniformly declined to bring the lightning rod player aboard.

"Kap stood for something that was bigger than him," James said. "How many people can wake up and say 'You know what, I'll give up everything that I've worked for my whole life, for the better of the conversation. I'm gonna lose everything I've got personally to better the conversation.?'"

In January 2018, James tweeted a quote from Dr. Martin Luther King Jr.: "-Injustice Anywhere Is A Threat To Justice Everywhere- Our Lives Begin To End The Day We Become Silent About Things That Matter- #ThankYouMLK50."