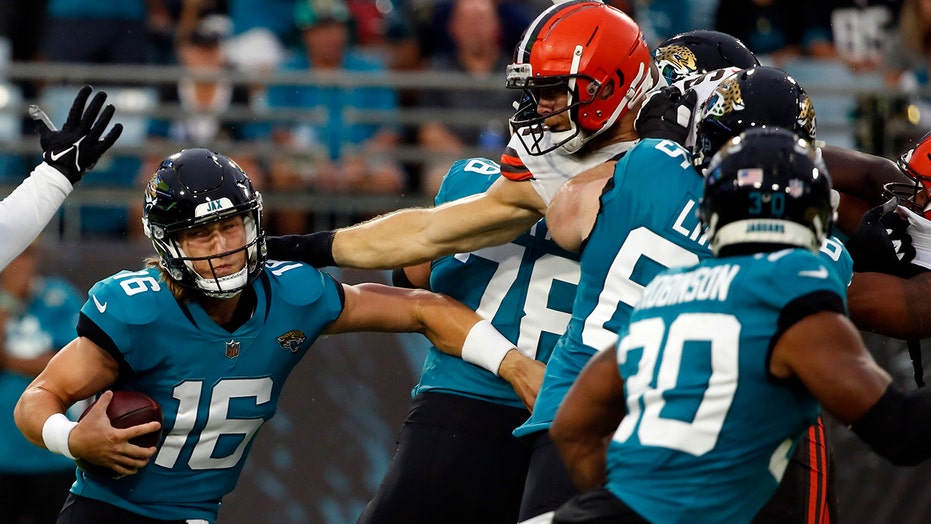 Trevor Lawrence’s professional debut opened with a sack and a fumble, hardly ideal but not overly concerning for the Jacksonville Jaguars.

The No. 1 overall pick in the NFL draft rebounded, delivering a couple of impressive throws and somewhat salvaging his first preseason game — a 23-13 loss to the Cleveland Browns on Saturday night.

Lawrence started over Gardner Minshew and completed 6 of 9 passes for 71 yards in two series. The most important part for Jacksonville: the former Clemson star left TIAA Bank Field healthy. There had to be some worry after Lawrence was sacked on the team’s first play.

"Obviously the first play's not kind of what you wanted for a first play," Lawrence said. "But after that I thought we did a good job."

Lawrence was taken down again on his second drive but responded with his best throw: a 35-yarder to Marvin Jones on third down. That one, however, came after Lawrence held the ball way longer than quarterbacks normally get away with in the NFL.

"Everybody reminding me it's a 20-game season so a 19-game season left," first-year Jaguars coach Urban Meyer said. "Just disappointed offensively. I don't like slow offenses. ... I don't want to be one of those slow, wallowing offenses. We'll get that fixed."

Meyer lamented having just 120 yards of offense at halftime — Cleveland had 240 — and a failed fourth-down run on Lawrence's second drive.

Lawrence failed to lead Jacksonville to points. The biggest takeaway was his offensive line, a veteran unit that failed to handle Cleveland’s backups.

"Concerning? Yeah, everything's concerning," Meyer said. "It's my job to be concerned."

So what should have been an advantage for Jacksonville looked more like a mismatch. The Browns, widely considered a playoff contender after finishing 11-5 last season, dominated both lines of scrimmage and moved the ball up and down the field.

"This is a part of the process," Browns coach Kevin Stefanski said. "We focus really on the work, and I thought the guys did a nice job competing out there and we've got another one next week."

They led 13-0 at halftime and could have been up bigger had Stefanski called for a chip-shot field goal from the 6-yard line. Instead, third-string quarterback Kyle Lauletta threw incomplete on a fourth-and-goal play.

Lauletta completed 19 of 27 passes for 212 yards and two touchdowns in relief of second-team QB Case Keenum.

Minshew was 4 of 8 for 47 yards, with an interception.

Jaguars tight end and hometown hero Tim Tebow was cheered every time he stepped onto the field. He probably should have had a reception, too. Minshew threw in Tebow’s direction in the second quarter, but newly signed receiver Tavon Austin stepped in front and caught the ball for a 23-yard gain. Tebow, undaunted, turned around and found someone to block.

Tebow got another shot at a reception late in the game, but the ball got tipped at the line of scrimmage and nearly picked after Tebow got a hand on the wobbly pass.

Linebacker Mack Wilson, one of just three defensive starters on the field for Cleveland, hurt a shoulder. Tight end Stephen Carlson left with a knee injury. Cornerback Kiondre Thomas was ruled out with a hamstring injury.

Jaguars cornerback Tre Herndon left the game in the first quarter with a knee injury. Safety Andrew Wingard was ruled out with a concussion. Defensive lineman Daniel Ross left in the fourth period with an ankle injury.

Jaguars cornerback CJ Henderson, who missed considerable time early in training camp because of COVID-19 and then sat out several more practices for personal reasons, was one of the few bright spots for the home team. Henderson had two pass breakups, including one on a deep ball.

"I saw him make a couple plays out there," Meyer said. "I'm just liking the fact that he's getting back into game shape. ... That COVID knocked the teeth out of him. ... We've just got to get him revved up and game speed and game shape."

The Browns host the New York Giants on Aug. 22.

The Jaguars play at New Orleans on Aug. 23, a rare Monday night game for Jacksonville.