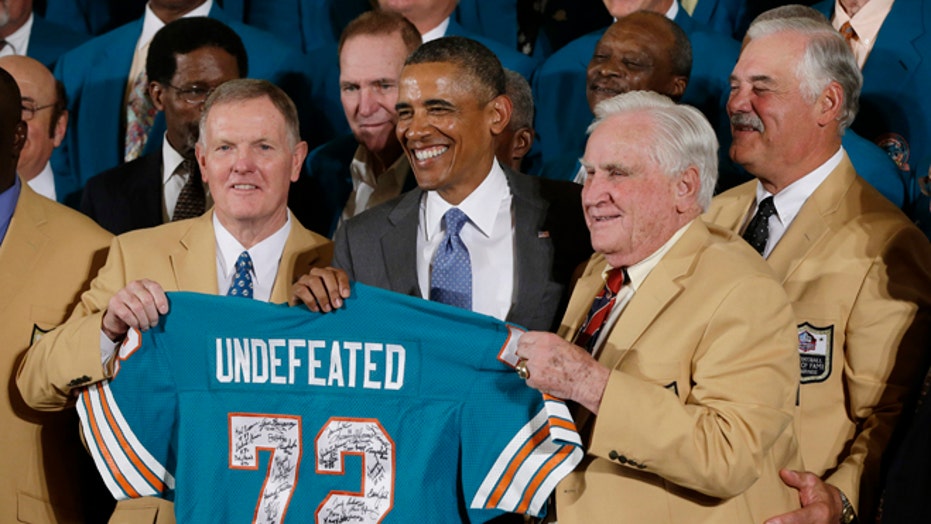 The NFL celebrated its 100th season this year and named the 1972 undefeated Miami Dolphins as the best team of the century.

The Dolphins won the Super Bowl that season and remain the only NFL team to go undefeated in the regular season and through the playoffs.

RAMS' JARED GOFF ON MISSING THE PLAYOFFS AFTER LOSS TO 49ERS: 'IT'S SICKENING'

Larry Csonka was a key member of the '72 Dolphins team. (Photo by Focus on Sport/Getty Images)

Hall of Fame running back Larry Csonka was named to the Pro Bowl that season – one of the eight seasons he played for the Dolphins over the course of his career. He was asked Sunday before the '72 team was honored at Hard Rock Stadium about being named the greatest team in the league’s history over the last 100 years.

“We took the g--damn thing. I’m tired of people telling me they named us. They named us s—t. We took it,” Csonka said before joking he had no “emotional response” to it.

He added that earning the perfect season came from “hard work.”

Miami went 14-0 during the regular season and defeated the Cleveland Browns and Pittsburgh Steelers before playing and beating the Washington Redskins, 14-7, in Super Bowl VII.

The only other team to go undefeated during the regular season were the 2007 New England Patriots, but they lost in the Super Bowl to the New York Giants.