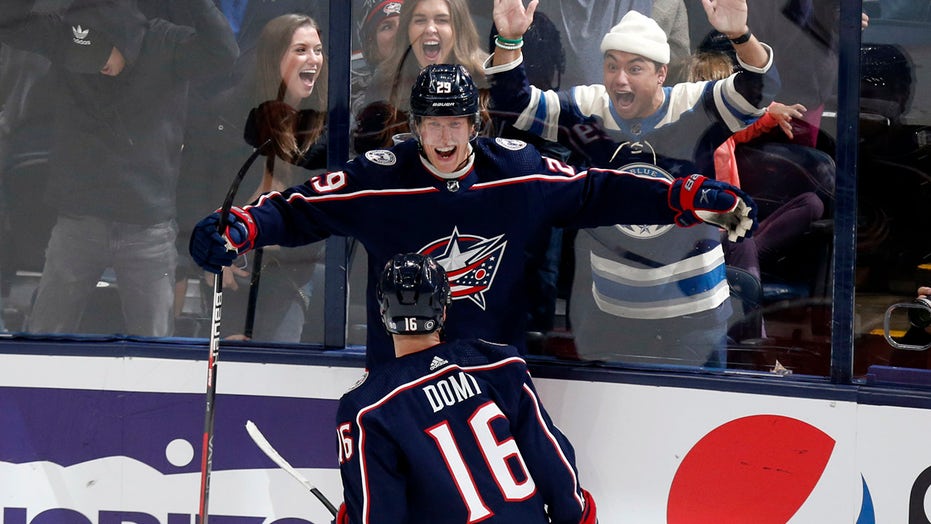 Patrik Laine scored at 1:49 of overtime to lift the Columbus Blue Jackets over the New York Islanders 3-2 on Thursday night.

Laine's wrist shot from the left circle sent him tumbling to the ice and beat goalie Ilya Sorokin.

Elvis Merzlikins made 28 saves as Columbus improved to 3-1.

Mathew Barzal scored early in the third period for the Islanders to tie the game after the Blue Jackets had tallied twice in 33 seconds to end the second.

Eighteen-year-old Cole Sillinger got his first NHL goal and Boone Jenner scored his team-leading third of the season for Columbus.

Scott Mayfield also scored and Sorokin had 24 stops for the Islanders, who dropped to 1-3.

After a scoreless first period, New York got on the board at 10:35 of the second when Mayfield intercepted a clearing pass in the Blue Jackets zone and found space between Merzlikins' pads.

The Islanders dominated the second until the two-minute mark. That's when Jenner tied it on a power play, deflecting Jakub Voracek shot from the point over a screened Sorokin. Columbus followed up with Vladislav Gavrikov's quick pass from behind the goal line to set up Sillinger.

Barzal tied it with his second goal of the season, a wrist shot over the shoulder at 5:03 of the third.

The game featured the league's youngest player, Sillinger, against the oldest, 44-year-old Islanders defenseman Zdeno Chara, who is in his 24th season. Chara had played against Sillinger's father, Mike, who had a 17-year NHL career.

The Islanders played the fourth game of a franchise-long 13-game opening road trip while construction is completed on the new USB Arena in Elmont, New York. They don't play at home until Nov. 20. The Islanders are accustomed to being away from home. Pandemic policy caused them to spend nearly two months in Canada for the 2020 playoff bubble in which they reached the Eastern Conference finals.

Islanders: At Arizona on Saturday.