Kobe is No. 1 cheerleader after Dirk hits game-winner vs. Lakers 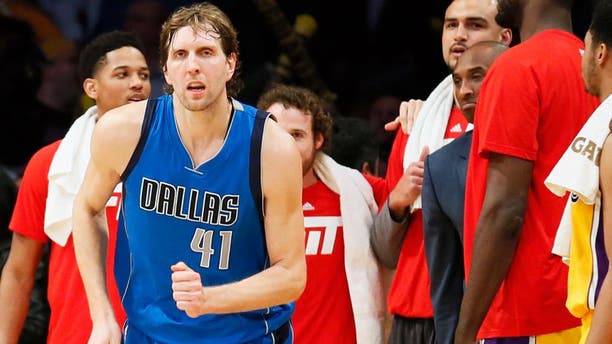 Dallas Mavericks' Dirk Nowitzki, left, runs on the court while Los Angeles Lakers' Kobe Bryant, right, reacts to Nowitzki making a shot over Lakers' Julius Randle, not seen, to give the Mavericks the lead in the closing seconds of an NBA basketball game Tuesday, Jan. 26, 2016, in Los Angeles. The Mavericks won 92-90. (AP Photo/Danny Moloshok)

Kobe Bryant sat out Tuesday night's game vs. the Dallas Mavericks, and he had a front-row seat for Dirk Nowitzki's game-winning shot.

In fact, Bryant was his No. 1 cheerleader after Nowitzki hit a pull-up jumper over Julius Randle in front of the Lakers' bench.

Bryant also had a pat on the back for Randle after the rookie missed a potential game-winning three at the buzzer. Randle, though, just kept trudging to the locker room.

Maybe Kobe's not the most popular guy among his teammates. Especially when he pulls stunts like that -- €” or this:

Dirk showed respect right back to Kobe. "He's our Michael Jordan for my generation," Nowitzki said after the game. "He's one of the best to lace them up."