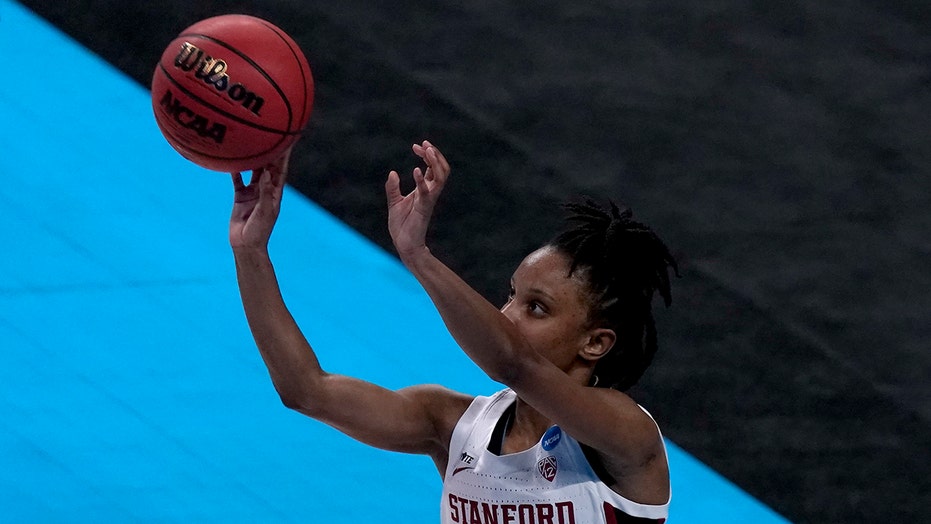 Kiana Williams became Stanford’s career leader in made 3-pointers with a big night at home in the women’s NCAA women’s tournament.

Not in California, but Texas, where this entire tournament is being played.

With her parents in the stands at the Alamodome in her hometown, and telling her teammates that she wants to play at home as long as possible, Williams scored 20 points with six 3s as the top-seeded Cardinal overwhelmed tourney first-timer Utah Valley 87-44 in the opening round Sunday night.

"It’s great she had like 52 people here, she really got us going," coach Tara VanDerveer said. "Our whole team shot the ball well, especially in the first half. I think the best thing was we were able to rest people and no one got hurt. I thought we did a really good job."

Stanford (26-2) never trailed after Williams hit a 3 for the first basket in the opening minute and tied the school mark of 295 held by Candice Wiggins. Williams set the record with her second 3 midway through the first quarter to put the Cardinal up 18-3.

"She just challenged me to be a pesky defender, to get my defense going so I could get my offense going," Williams said of Wiggins’ advice. "Haven’t really had a conversation with her about the 3-point record. It hasn’t really been at the top of my list. I just want to win."

Lacie Hull added 12 points while 10 different players scored and 10 had rebounds for Pac-12 champion Stanford (26-2), the No. 1 overall seed for the first time since 1996. Up next in the Alamo Region is No. 8 seed Oklahoma State on Tuesday.

Josie Williams had 18 points to lead Utah Valley (13-7), the WAC runner-up in the regular season that lost its first conference tournament game, represented the league in the NCAA Tournament because undefeated California Baptist was ineligible to advance while still completing the transition from Division II to Division I.

"As far as my group, I couldn’t be more proud" second-year Utah Valley coach Dan Nielson said. "Dealing with COVID this year like everybody did and getting down here to the tournament is a massive accomplishment for us, even if we got here in an interesting way."

Nielson called it a positive experience to "compete against one of the best, not just in the country, but probably the world. I mean that team can beat a lot of pro teams."

ADDING TO THE RECORD

VanDerveer’s 1,120th career victory — she passed Pat Summitt’s 1,098 earlier this season to become the winningest coach in women’s basketball — was the 90th NCAA Tournament win for the Cardinal, who are in their 34th tourney. Only Tennessee has more, appearing in all 39.

Nielson finished his 48th career game as a head coach. The former BYU associate head coach is a native of Round Rock, Texas, only about 100 miles from the Alamodome.

Wiggins was a beloved guard who starred for the Cardinal from 2005-08 and carried the team back to the Final Four in ’08 for the first time in 11 years before losing to Tennessee in the championship game. She was happy for Williams surpassing her mark.

"She’s incredible. I have no words to describe ... just that I’m so grateful that I got to work with her a few summers ago at Stanford camp," Wiggins wrote in a text message to the AP. "Her and I have a major soul bond. Love and appreciate her so much!!!"

Utah Valley shot 25% (13 of 52) from the field, becoming the ninth team this season Stanford held to its season-low shooting — and the 11th to shoot under 30%. It was the 20th win this season for the Cardinal by at least 20 points.