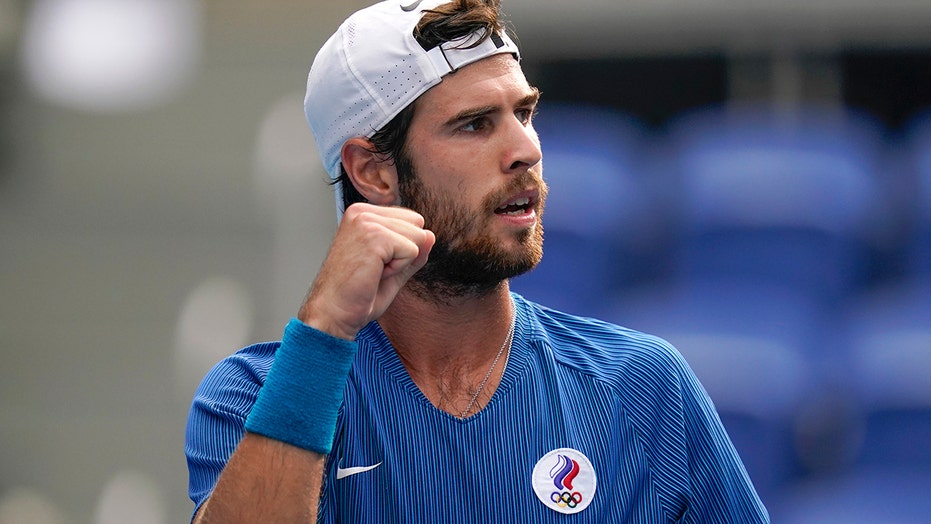 Karen Khachanov is into the gold-medal match in tennis at the Tokyo Olympics.

The 25th-ranked Russian player beat Pablo Carreno Busta of Spain 6-3, 6-3 on Friday to reach the biggest final of his career.

Khachanov’s opponent for gold will be either top-ranked Novak Djokovic or Alexander Zverev of Germany, who were next to play on another humid but overcast day at the Ariake Tennis Park.

Khachanov was pushed to three sets in three of his previous four matches in Tokyo but showed no signs of fatigue against Carreno Busta, who had knocked off second-seeded Daniil Medvedev in straight sets a day earlier.

To celebrate, Khachanov launched a ball high into the air that landed on the arena’s retractable roof.

Khachanov is coming off a quarterfinal appearance at Wimbledon.

Also, Djokovic was to play again with Serbian partner Nina Stojanovic in the mixed doubles semifinals against the Russian duo of Elena Vesnina and Aslan Karatsev.

The first medal of the tennis competition went to the New Zealand team of Marcus Daniell and Michael Venus, who took bronze in men’s doubles by beating Austin Krajicek and Tennys Sandgren of the United States 7-6 (3), 6-2.

Daniell and Venus became the first New Zealand players to win a medal in tennis since 1912, when Anthony Wilding took bronze in singles while representing Australasia.

Wilding, New Zealand’s only Grand Slam singles champion with six titles, was killed during World War I in 1915 at the age of 31.