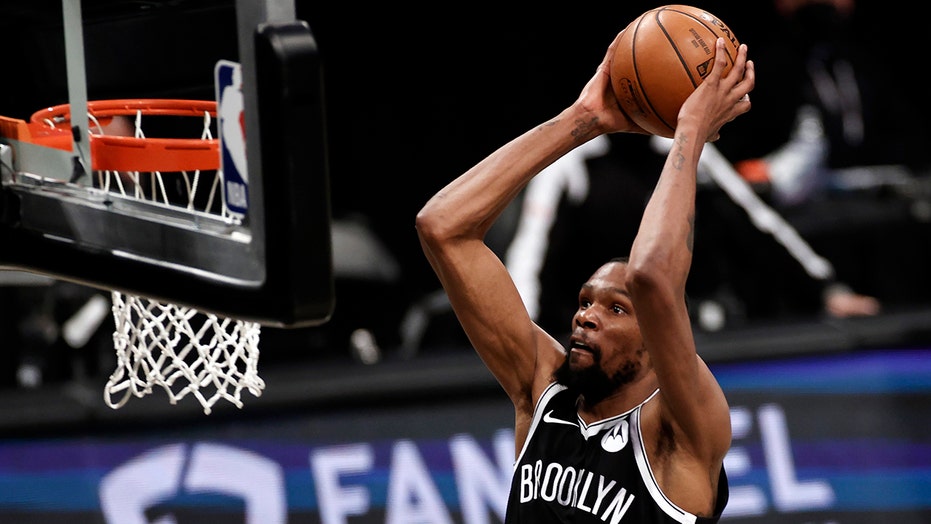 Kevin Durant will likely be the only superstar the Brooklyn Nets will have when the team plays the Milwaukee Bucks in Game 5 of their second-round playoff matchup on Tuesday night.

Kyrie Irving went down with an ankle injury in Game 4 and will not play in the tie-breaking game while James Harden, who hasn’t played since Game 1 after aggravating his hamstring, was upgraded to questionable to play with speculation swirling about his status hours before tip-off.

Durant, at this point, will likely be relied upon solely to carry the Nets and hope the role players surrounding him will pick up the slack.

When asked about the possibility of not having Irving and Harden, the 11-time All-Star didn’t appear to feel any added pressure.

Durant was left alone in Game 4 and led the Nets with 28 points on 9-of-25 shooting. He was 1-for-8 from three-point range and added 13 rebounds.

"It’s got nothing to do with me. I wish my brothers were out there playing, I wish they were healthy, but that’s a part of the game," Durant added. "We all understand that. We wish they were out there playing, but I know they’re gonna be doing their best to get back on the floor and get healthy as fast as possible, and that’s all that we can hope for."

In Irving's absence and Harden's possible limited role, the role players for the Nets will have to step up.

No Brooklyn players outside Durant and Irving were in double figures in scoring. Joe Harris, Blake Griffin and Bruce Brown were a combined 9-for-21 and 3-for-11 from three-point range in Game 4. The three players combined for 23 points.

Regardless of the struggles in Game 4’s 107-96 loss, Durant said it’s pretty simple for Brooklyn to pick up the win and it comes down to execution.

"We can have as many speeches as we wanna give, but pretty much around this time, every team is just going out there and just playing the game. We got a game plan we want to execute, it’s as simple as that. We try not to add too much extras on anything. We all know what this game is about; we all know what this time is. It’s the playoffs," he said.

"I trust in everybody on this team, and we trust in each other."

Durant will be in a big spot with a lot riding on his shoulders, but it’s exactly what Brooklyn signed the NBA star for.

In a pivotal game on the big stage at the Barclays Center, the Nets and Bucks will tip-off at 8:30 pm on TNT.