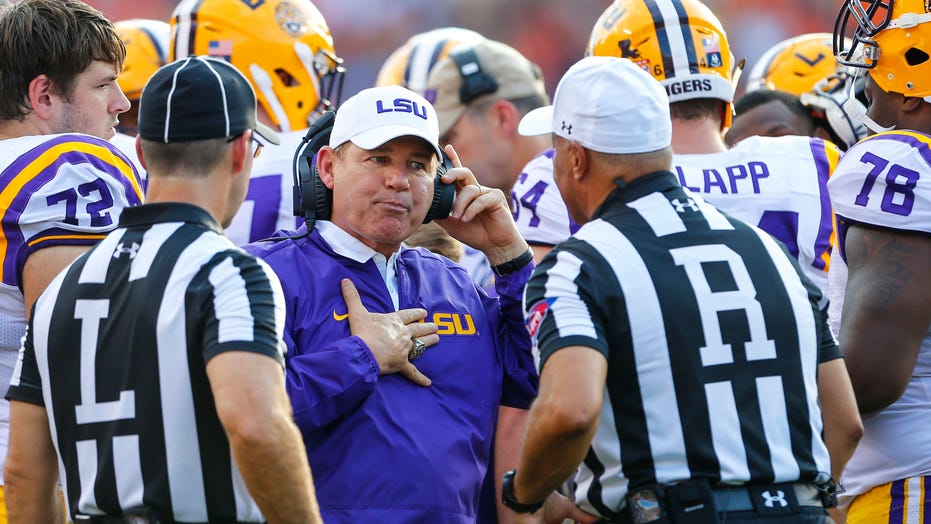 Kansas placed coach Les Miles on administrative leave Friday night, hours after a report released by LSU revealed school officials there considered firing him in 2013 because of his behavior with female student workers.

"Even though the allegations against him occurred at LSU, we take these matters very seriously at KU," Kansas athletic director Jeff Long said in a statement. "Now that we have access to this information, we will take the coming days to fully review the material and to see if any additional information is available. I do not want to speculate on a timeline for our review because it is imperative we do our due diligence."

Miles is entering his third year as Kansas coach, and coming off a winless 2020 season. He was coach at LSU for 11-plus years before being fired four games into the 2016 season.

The 67-year-old Miles has denied allegations he made sexual advances toward students and has said he merely sought to serve as a mentor for students who expressed an interest in pursuing careers in sports.

Earlier in the day, LSU released a law firm's 148-page review of how the university has handled sexual misconduct complaints.

Then-athletic director Joe Alleva's 2013 recommendation to former LSU President F. King Alexander to fire Miles is detailed in the report by the Husch Blackwell law firm. The report offers a scathing view of the resources and attention LSU has dedicated to complaints of sexual misconduct and violence against women campus-wide.

While that 2013 investigation by the Taylor Porter law firm found Miles showed poor judgment, it did not find violations of law or that he had a sexual relationship with any students. Taylor Porter also concluded it could not confirm one student’s allegation that Miles kissed her while they were in the coach’s car with no one else present.

Alleva recommended Miles be fired with cause. In an email dated June 2013, Alleva wrote Miles was guilty of "insubordination, inappropriate behavior, putting the university, athletic dept (cq) and football program at great risk."

The Taylor Porter review had been kept confidential for about eight years until a redacted version of it was released this week after a lawsuit filed by USA Today.

The Husch Blackwell report, which revisits the Miles investigation, also describes how the former coach "tried to sexualize the staff of student workers in the football program by, for instance, allegedly demanding that he wanted blondes with big breasts, and ‘pretty girls.’"

Meanwhile, LSU has not fired any current employees whose conduct was criticized in the Husch Blackwell report.

Interim President Tom Galligan said during an LSU Board of Supervisors meeting Friday in Baton Rouge, Louisiana, that he sought to be fair in issuing discipline. Galligan stressed that the independent report concluded that failures in responding to sexual misconduct complaints at LSU stemmed largely from ambiguous policies and a lack of resources for "overburdened" employees tasked with handling such matters.

"People will be unhappy either way," Galligan said of how the university chooses to discipline employees involved in the scandal.

Galligan then read an excerpt from the report stating that such employees "were not served well by the leadership of the university."

Attorney Scott Schneider, who led the Husch Blackwell review, said that while LSU does not have a monopoly on mishandling sexual misconduct cases, the university "has been very slow to develop policies and infrastructure and personnel that was really required" to ensure compliance with federal Title IX laws. Those laws deal broadly with gender equity in education and also apply to instances of sexual violence or harassment at educational institutions.

The report said allegations against LSU athletes were treated no differently than those against non-athletes. However, Schneider noted that star athletes tend to have inherent leverage over victims at schools where athletics are highly valued.

Victims are "understandably reluctant to participate in the Title IX process because they fear community backlash," Schneider said.

Galligan offered public apologies to victims and said he intends to act on all 18 recommendations in the report on how to strengthen how the university handles sexual misconduct complaints campus-wide. Those recommendations called for everything from clarification of policies and protocols to increases in staffing and departmental reorganizations."

Guice played for current football coach Ed Orgeron, but Schneider cautioned against blaming coaches for institutional failures in the handling of sexual misconduct complaints. Schneider’s recommendation is that only Title IX officials with expertise in such matters should handle such investigations and resulting discipline, while coaches should focus on coaching.

"You don’t want the coaches involved," Schneider said. "What we want is athletics to be out of it entirely and allow the Title IX office to do its investigation."

The meeting opened with a statement from former LSU student Caroline Schroeder, who informed the university that she was sexually assaulted by a fraternity member in 2016 and has described meeting official resistance as she sought to pursue her complaint.

"I’d like to express how little faith I have in this board to do the right thing today or in the months to come," she said. "I genuinely hope that I’ve effectively insulted at least a few of you right now, because that insignificant and fleeting feeling that you’re experiencing in this particular moment is absolutely nothing in comparison to the persistent and often debilitating fear that survivors at LSU suffer on a daily basis as a direct result of your deliberate indifference to abuse on this campus."