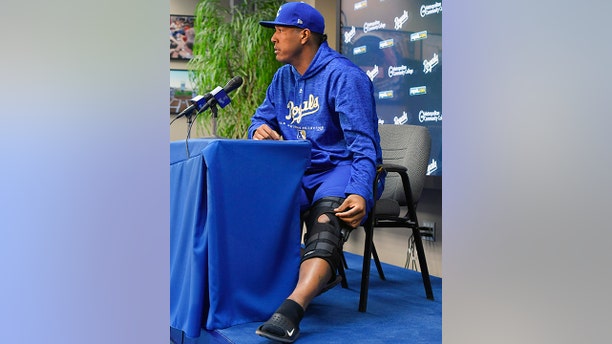 Kansas City Royals catcher Salvador Perez will miss the start of the 2018 Major League Baseball season after he sprained the medial collateral ligament in his left knee while carrying a suitcase.

"I just lost my balance," Perez told reporters Wednesday. The five-time All-Star heard a "pop" and immediately called Royals trainer Nick Kenney, who advised Perez to ice the knee and come in for an MRI exam.

The exam revealed a Grade 2 sprain with a minor tear of the ligament.

No surgery is required, and recovery can be as little as four weeks. But the freak injury leaves the Royals without one of their top hitters when they open against the White Sox on Thursday.

"He's distraught," said Yost, who said of Perez's recovery time, "Hopefully it is shorter than longer."

Perez told reporters that what irked him most about the injury is it happened at home, rather in the midst of competition.

"All the work I do, training in the offseason, I feel sad," he said.

Perez, coming off one of the best seasons of his career, had been on a tear in spring training. He appeared in 16 games and hit .350 with six homers and 40 RBIs in only 40 at-bats during the Cactus League schedule.

The Royals were counting on having his bat in the lineup after losing run-producers Eric Hosmer and Lorenzo Cain in free agency. And while they addressed some of the power loss by signing outfielder Jon Jay, first baseman Lucas Duda and re-signing third baseman Mike Moustakas -- who set the franchise single-season home run record last season -- it still hurts to lose Perez's bat in the lineup.

Yost said after a rainy workout at Kauffman Stadium Wednesday that he expects Drew Butera, the club's backup a year ago, and promising youngster Cam Gallagher to share catching duties in Perez's place.

Butera hit .227 with three homers and 14 RBIs in 75 games last season, his third with the Royals, while Gallagher hit .250 with a homer and five RBIs in 13 games as a late-season call-up.

The Royals begin the season against former pitcher James Shields and the White Sox, then get Friday off before games Saturday and Sunday to wrap up a three-game set. Then they go on the road for three games in Detroit and Cleveland before returning home for a seven-game homestand.