Jerry Jones explains why the Cowboys still like Johnny Manziel 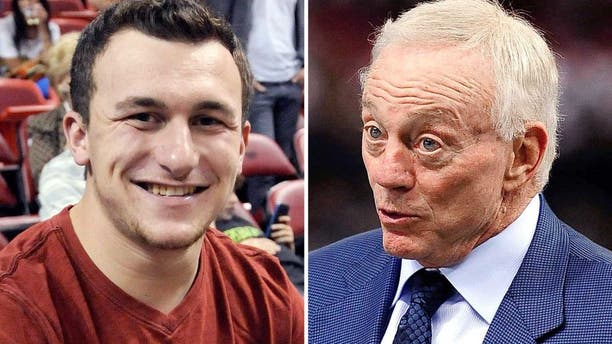 Dallas Cowboys owner Jerry Jones has always had a special place in his heart for troubled quarterback Johnny Manziel, who Jones had to be talked out of drafting in 2014.

In a conversation with Peter King of MMQB.com, Jones made it clear that his primary concern with respect to Manziel right now is that the free agent quarterback gets his personal life and health in order. Manziel currently awaits a decision from a grand jury over a domestic violence incident with his girlfriend on Jan. 30 for which he faces a maximum punishment of one year in jail for misdemeanor assault. Manziel has also struggled with alcohol abuse, which prompted a 10-week stay in rehab beginning in Feb. 2015.

But if Manziel can manage to turn his life around? Father Time has a grasp on Tony Romo and is bringing him down.

Jones said in part (video above):

"I have the same impression when he came out of A&M of what his potential is as a football player. But you can be the smartest mathemetician, you can be the greatest politician, but if you can't get it straight, with your life, you don't get those chances and so I'm more concerned with that. With that in mind, not thining about where is to football and the Cowboys."

"I haven't changed my opinion of how exciting a player that he is, how unique a player that he is. And he plays a unique position. We have an old adage in talent evaluation, if you see them do it a couple times, they can do it. Now, will they have the discipline and the will to go out there and do it day in and day out, do like a Peyton Manning and make a career out of doing it every day. That hasn't been shown."

While it looks like the Cowboys will move on from another player with serious off-field issues, defensive end Greg Hardy, who was signed in 2015 despite getting convinced on domestic abuse charges, Jones proved that the team is willing to overlook personal shortcomings in the name of talent.

If Manziel gets a second chance anywhere in the NFL, there's a decent chance it would be in Dallas.