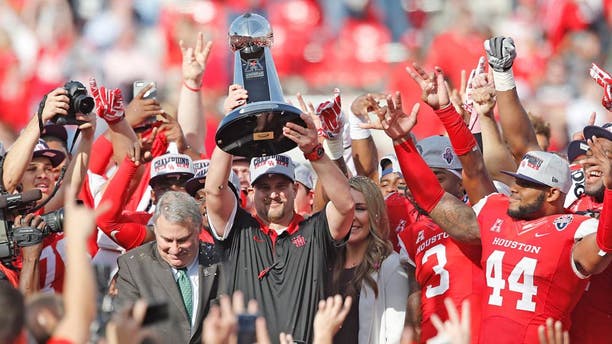 If you think Tom Herman's offense at Houston is a great example of post-modern spread football, you should see how he celebrated finishing his first full-year recruiting class.

There's no debating the first year in Houston could hardly have gone better for Herman.

Is this a great way to kick off the second or what?

Fax machines are the subject of a lot of jokes every February, but recruits have had the option of filing electronically for a few years now.

Herman told the Houston Chronicle only four of his 17 signees went the electronic route, though.

Herman's class ranked No. 51 in the nation according to Scout.com, better than 17 Power-5 schools, including six from the ACC and five from the Big Ten.

Five-star defensive tackle Ed Oliver of Houston's Westfield High is the crown jewel of the class.

Houston went 13-1 in Herman's first season, winning the American Athletic Conference and spanking Florida State in the Peach Bowl to close things out.

On National Signing Day, he joined Stewart Mandel and Bruce Feldman to talk about recruiting, the College Football Playoff rankings and more.