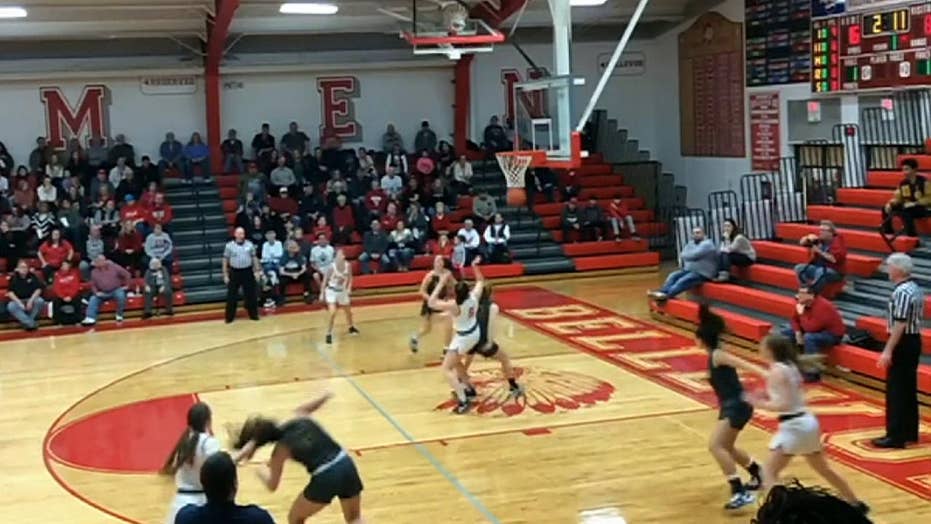 Audience members shouted at the officials after the Bellevue player grabbed the Norwalk player by the hair.

An incident over the weekend involving two Ohio high school girl basketball players was under investigation, a school district said.

During a game Saturday, a Bellevue High School athlete pulled a girl from Norwalk High School down to the court by the hair. The altercation occurred after a missed 3-pointer by the Bellevue player. It wasn’t clear what sparked the incident.

NEWARK HIGH SCHOOL BASKETBALL COACH ATTACKED ON VIDEO, ALLEGEDLY BY HIS OWN PLAYERS

The Norwalk coach was irate after the play. None of the referees standing nearby apparently saw it.

“First and foremost, I am concerned with the health of our injured student athlete,” Norwalk superintendent George Fisk told WTOL-TV in an email. “She is a fantastic, hardworking young lady and in no way deserved the aggressive unsportsmanlike action taken against her. I have been in contact with the administration of Bellevue City Schools; they have assured me that appropriate action will be taken upon the conclusion of their investigation. Additionally, it is my hope the Ohio High School Athletic Association will not remain silent and uninvolved in this situation.”

Bellevue superintendent Kim Schubert told the station Tuesday that there was disciplinary action, but didn’t address it specifically.

“Since viewing the video on Saturday, with the knowledge that no foul was called during the game, we quickly came to the conclusion that it would be our obligation to address the incident with disciplinary action and we have done so,” Schubert said. “I hope that this clarification will provide a conclusion to this situation leaving no doubt that the situation was immediately addressed. Our priority is the health and safety of all student athletes, including athletes at opposing schools and our own athletes.”

Family members of the Norwalk athlete told WTOL-TV that she was recovering and still being evaluated.