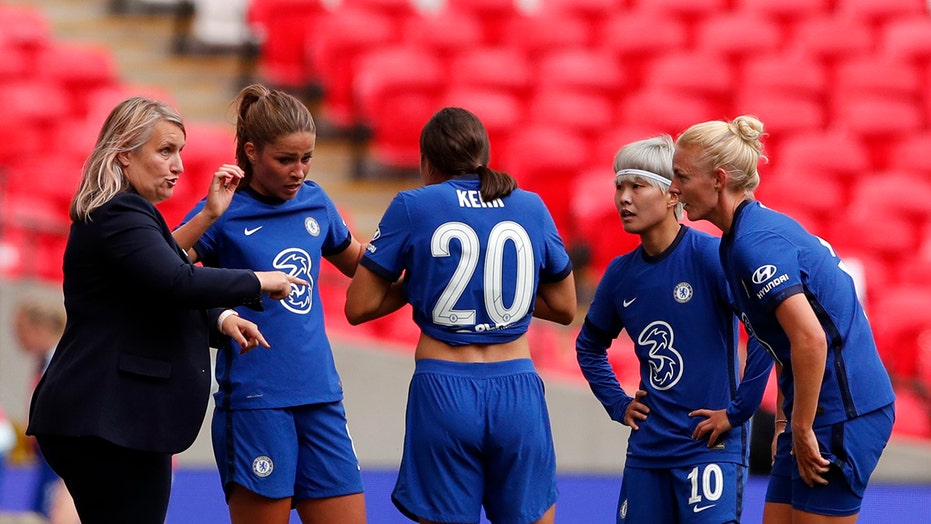 Chelsea manager Emma Hayes has deployed the right tactics while leading her team to its first Women’s Champions League final. And her psychological methods have paid off, too.

Before facing Bayern Munich in the second leg of the semifinals and down 2-1, she showed her players a video of a female UFC champion repeating the phrase "I'm the best" moments before a fight.

Hayes gives teamwork and leadership lessons by encouraging players to learn from the habits of geese, who fly in formation, take turns at the front and hold each other accountable.

"That's a big part of who I am — developing mentality, mindsets," Hayes said recently. "I might have some performance psychology support for individuals but ... the best psychologist is the coach."

Hayes will be trying to become the first Englishwoman to coach a team to victory in the tournament when Chelsea faces Barcelona on Sunday in Gothenburg, Sweden. Chelsea got there by beating Bayern 4-1 nearly two weeks ago, eliminating the German club 5-3 on aggregate.

Only two female coaches have won Europe's premier club competition, the last coming 12 years ago with Martina Voss-Tecklenburg of German club Duisburg. Finalists since then have all been coached by men.

For someone who once hoped to become an intelligence officer — "I had no ambition to be a football coach. I wanted to be a spy for MI5 or MI6," she said in 2019 — it's perhaps no surprise that the 44-year-old Hayes emphasizes the mental side of the game.

Hayes' always-entertaining news conferences and interviews have included references to brain-function analysis — as well as cups of tea, days out with her young son, and the occasional expletive.

Hayes, who grew up in a working-class family in north London, has a "no excuses" philosophy in which she asks the team each week if there's anything she missed in preparation, thereby transferring responsibility to the players.

"She makes us used to having the pressure so whenever the moments come where it’s a pressured game, it's not that big of a deal for us because we deal with that pressure every day," said Chelsea captain Magdalena Eriksson, who cleared a ball off the line late in the win over Bayern.

"She’s taken Chelsea to this point," the Sweden defender continued. "She’s pushed us every year."

Under Hayes, Chelsea has won the Women's Super League four times — the most in England — in addition to other trophies.

The London club has a chance to match Arsenal's quadruple from 2007, when Hayes was an assistant coach there. Chelsea has already won the WSL title and the League Cup. After Sunday's final, there's still the women's FA Cup.

"You can’t have that many days off in this business," Hayes said after clinching the WSL title last Sunday.

Hayes has credited her experience in the United States with shaping her, telling Chelsea TV that she was born in England "but I was definitely made in America — that I’m certain of, from winning mentality to determination."

In search of coaching opportunities, she left London in her early 20s and led a semi-pro team in Long Island before becoming head coach at Iona College. After the Arsenal stint, she was hired in 2008 as head coach and director of operations for the Chicago Red Stars ahead of the inaugural season of Women's Professional Soccer, the precursor to the current NWSL.

A fan of former Chicago Bulls head coach Phil Jackson, Hayes was fired early in the 2010 season after only one win in the team's first six games.

Today, though, her high-flying Chelsea team is the first English club since Arsenal in 2007 to reach the European final. Like geese, she said, any of her players are capable of stepping up. Alex Ferguson had used a similar metaphor when he managed Manchester United.

"I have shown them why they fly in V-formations," Hayes said, "what its purpose is, what everybody’s role is, how they communicate, how they support each other, and importantly that you fly further together and that’s the bottom line. Same for my team. Sometimes different people take the lead."