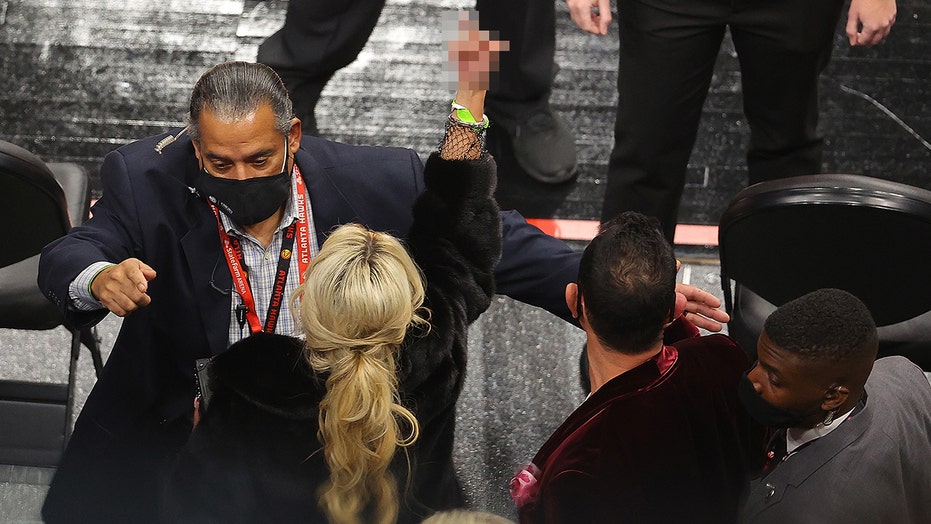 An Atlanta Hawks fan that was ejected from Monday night’s game against the Los Angeles Lakers after getting into a verbal dispute with LeBron James where she was pictured lowering her mask spoke out on Instagram to explain what she says started the courtside argument.

Juliana Carlos, 25, explained in a series of since-deleted videos on her Instagram what triggered the altercation between her husband and James and what led to her involvement.

LEBRON JAMES REACTS TO TOM BRADY’S 10TH SUPER BOWL APPEARANCE: ‘AT OUR AGE, WE CAN STILL DOMINATE OUR SPORT’

Video from the game shows Carlos lowering her mask while she fires back: "Shut the f--- up. Don't talk to my husband like that."

Four fans, including Carlos and her husband, were ejected from the game as a result.

James was asked about the courtside spat after the game but he didn’t seem too phased by it, even saying that he didn’t believe the argument "warranted" them being thrown out.

He continued: "There was a back-and-forth between two grown men and we said our piece. He said his piece, I said my piece and then when someone else jumped into it and said their peace but I didn’t think they should’ve been kicked out."

James said coyly that alcohol consumption may have played a role.

"They might have had a couple drinks, maybe," he said. "And they could have probably kept it going during the game, and the game wouldn't have been about the game no more, so I think the referees did what they had to do."

However, James took a dig at Carlos on Twitter after the game, calling her a "Courtside Karen."