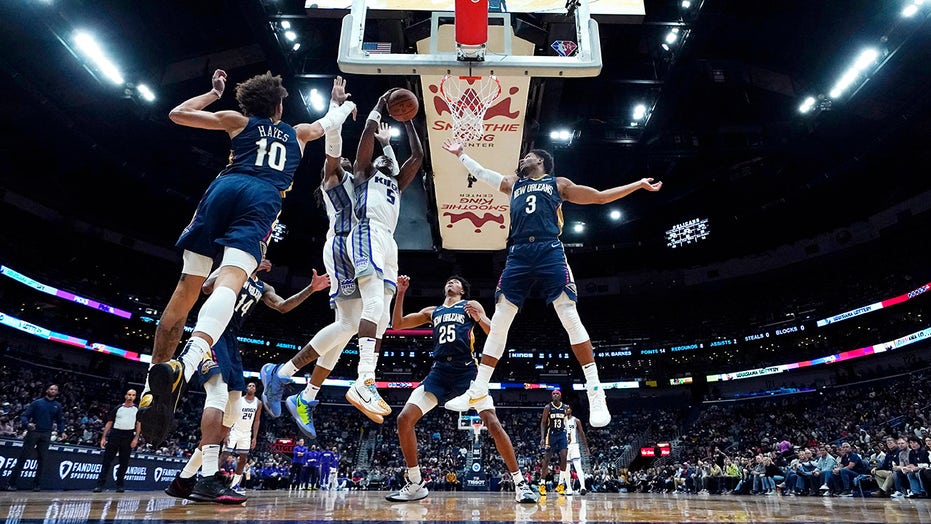 De'Aaron Fox and a productive supporting cast have Sacramento Kings ruling the road early this season.

Fox scored 23 points, Richaun Holmes added 21 and the Kings beat the New Orleans Pelicans 113-109 on Friday night to win their second straight away from home and remain unbeaten away from Sacramento.

"We didn't get rattled. We were able to get to the free throw line, make our free throws," Fox said. "We were just able to finish it off. That’s all you hope to do."

Harrison Barnes had 18 points and 12 rebounds, and Buddy Hield scored 20 points for Sacramento, which has started the season with three road victories and two home losses.

"It's never easy to win in this league, especially on the road," Kings coach Luke Walton said. "Proud of our group for fighting through it and finding a way to pull out another one."

Jonas Valanciunas had 24 points and 13 rebounds for the Pelicans, who briefly led late in the third quarter before Hield scored six straight points to give the Kings the lead for good.

Brandon Ingram had 22 points and Devonte’ Graham added 16. Graham's fourth 3 pulled the Pelicans to 107-104 with 23 seconds to go. But the Pelicans had to start fouling early in Kings possessions after that, and Sacramento made went 6 of 6 from the foul line to close it out.

Playing without star forward Zion Williamson, who is recovering from offseason foot surgery, the Pelicans have dropped five of their first six games.

"I’ve talked to them before and just said ‘Look, things are going to turn. We are going to get better,’" Pelicans first-year coach Willie Green said of his players. "We’re going to win some of these games. But I love our character — high character guys in our locker room. I love our fight. We’re just coming up a little short right now."

The Kings led 59-48 at halftime thanks to an 11-0 run to close out the second quarter. Barnes started the surge with a reverse layup, and Hield added a driving layup and a 3 before Fox's layup closed out the half.

Sacramento led by as many as 13 when Fox dunked early in the third. But New Orleans rallied later in the period when Ingram hit three straight mid-range jumpers to initiate a 13-2 run that included a 3 by rookie Trey Murphy III for a 70-69 lead.

Ingram capped the spurt with a layup, but momentum turned again when Hield hit a 3 and then was fouled by Murphy on another shot from deep.

The foul was ruled a flagrant-1 and, after Hield made all three free throws, Davion Mitchell converted inside to give the Kings an 8-0 run and 77-72 lead after three quarters.

That spurt by Hield, who was drafted sixth overall by New Orleans in 2016, "was very big because they had a lot of the momentum there," Walton said.

Sacramento made 24 of 25 free throws for the game.

"Good teams shoot good percentages from the foul line. You take care of your business and making free throws is something we talk a lot about," Walton said. "Our guys work on it. Really, that was a big part of how we were able to keep that lead in the fourth quarter."

While Walton expressed admiration for Fox’s ability to score in bunches, he suggested that the Kings will be more formidable when production is balanced, as it was in New Orleans.

"That’s what we’re trying to build towards, is knowing that we don’t have to just rely on one person," Walton said. "We don’t have one megastar, but we have some really good players on our team and that’s how we’re going to be at our best."

Kings: Visit Dallas on Sunday for the third stop on a four-game trip.

Pelicans: Host New York on Saturday night to close out a three-game homestand.