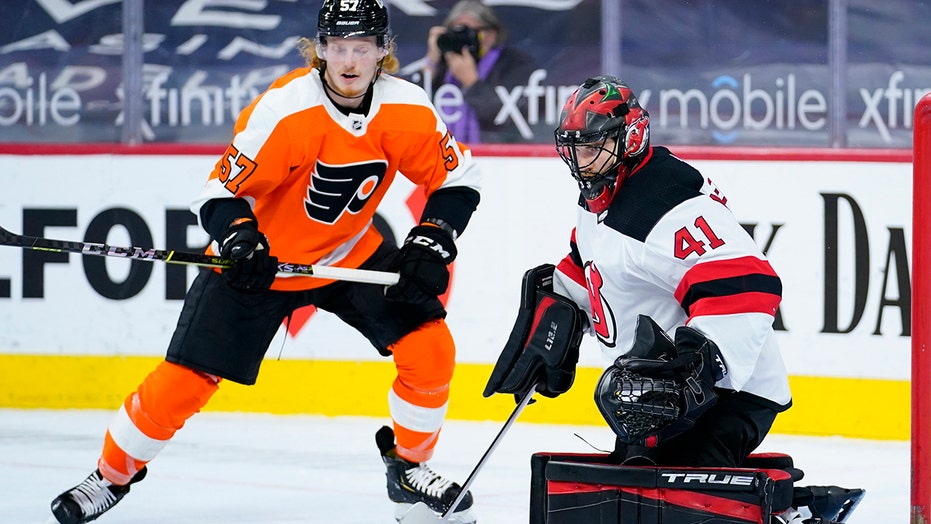 Gritty stripped off his Philadelphia Flyers jersey and black shorts and left only his green belly button exposed as the final horn sounded.

Much like their mascot, the streak goes on for the Flyers.

They finished yet another season without a Stanley Cup — they haven’t won one since consecutive championships in 1974 and 1975 — and this ends as one of the more disheartening ones in franchise history.

Joel Farabee scored two goals and James van Riemsdyk added one on the power play to lead the Philadelphia Flyers to a 4-2 win over the New Jersey Devils in the season finale for both teams on Monday night.

"I think we need a little bit of away time to clear our minds," Flyers coach Alain Vigneault said. "We need to take the time needed to analyze this."

Gritty stripped to his orange fur, exposing his belly button as the final horn sounded. The Flyers raised their sticks toward the maybe 2,000 fans left at the Wells Fargo Center.

"I know we have a good group here and a good core," Farabee said.

Playoffs were certainly expected, and a deep postseason run seemed possible, when the Flyers broke training camp in the second year under Vigneault. The Flyers earned a No. 1 seed in the restart bubble season, won their first playoff series since 2012 and were brimming with young talent that included Travis Konecny, Ivan Provorov and Carter Hart. The season instead unraveled in March with 11 losses and the Flyers even gave up 15 straight goals to the New York Rangers over two games. A trendy pick to come out of the East Division, the Flyers instead trudged to the finish line.

"Before the season started, I don’t think anybody thought we’d be in this position," team captain Claude Giroux said. "It’s very frustrating, confusing."

The Flyers still handed out hardware before the game and named Sean Couturier the team MVP for the third straight season. He became the second Flyer since the inception of the award in 1985 to win it in three consecutive seasons, joining Ron Hextall (1986-89) and Eric Lindros (1993-96).

Well, Vigneault couldn’t really come up with an easy answer before the game when asked his selection for MVP.

"I’d have to give that some deep thought," he said. "But I would say, I think a guy like (Justin Braun) who plays dependable hockey. Considering the situation this year, I thought he had a real solid season for us."

Playing hard until the end, Braun suffered a broken foot against the Devils.

Vigneault, who has been openly critical of the regression of the Flyers’ core, general manager Chuck Fletcher and chairman Dave Scott are set to address the media on Tuesday for a state-of-the-franchise address.

The assessment won’t be pretty.

Pressed on what went wrong this season, Vigneault said, "I’ll get into that tomorrow."

The Devils came into 2021 off a last-place finish in the Metropolitan Division and not much was expected this season. They were a surprise early in coach Lindy Ruff’s first season before New Jersey fell back toward bottom of the standings. Only Buffalo had fewer points out of the East.

"I reflect on the growth of a lot of young players," Ruff said. "I like where these players are going. I like that they're all on an upward path. But it's a place we don't want to be. We've got to understand to be a better team, be a playoff team, we've got to have nights where we finish, nights where we defend better."

There was no juice inside the Wells Fargo Center — though the Flyers and Penn Medicine partnered to make the one-shot Johnson & Johnson coronavirus vaccine available to fans before Monday night’s game. The Flyers said 75 people received COVID-19 vaccines.

Pavel Zacha scored his 17th goal of the season and Janne Kuokkanen added his eighth to give New Jersey a 2-0 lead. The Flyers tied it 2-2 on Farabee’s 19th goal of the year and Couturier’s 18th.

Provorov was named the Flyers’ top defenseman; Farabee won the Pelle Lindbergh Trophy as most improved player; James van Riemsdyk won the Yanick Dupre Class Award as the Flyer who best illustrates character, dignity and respect for the sport both on and off the ice; and Giroux won the Toyota Cup as the Flyer who accumulated the most points from being selected "Star of the Game."

Couturier also won the Gene Hart Memorial Award for the third time in the last four years as the Flyer who shows the most heart throughout the season.

The offseason for Devils and Flyers.