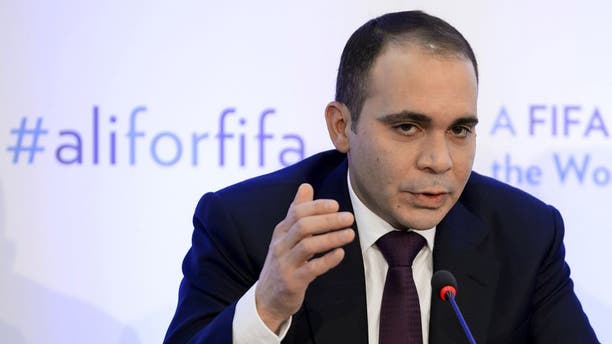 FIFA presidential contender Prince Ali bin al Hussein gestures during a press conference on February 11, 2016 at the Geneva press club. The FIFA presidential election, when a successor to the disgraced Sepp Blatter will be voted in as the head of world football's governing body, will take place in Zurich on February 26. / AFP / FABRICE COFFRINI (Photo credit should read FABRICE COFFRINI/AFP/Getty Images)

FIFA presidential candidate Prince Ali of Jordan has questioned the role of election rival Sheikh Salman in alleged abuses of Bahrain players in 2011.

Sheikh Salman has become front-runner in a FIFA campaign he began by strongly denying any part in helping to identify athletes who took part in Arab Spring protests five years ago.

Then, Sheikh Salman was president of the Bahrain Football Association.

Prince Ali told reporters, when asked about Sheikh Salman, ''that person didn't protect or stick up for his players at that time.''

The prince says it's a ''simple, basic fact of the matter.''