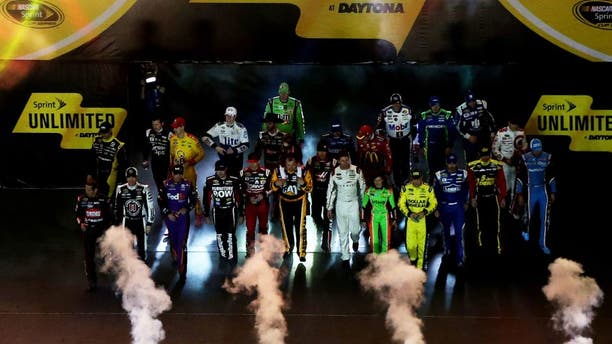 DAYTONA BEACH, FL - FEBRUARY 14: A view of driver introductions prior to the 3rd Annual Sprint Unlimited at Daytona at Daytona International Speedway on February 14, 2015 in Daytona Beach, Florida. (Photo by Sean Gardner/NASCAR via Getty Images)

Missing from list is a driver for the No. 14 Stewart-Haas Racing Chevrolet, although Brian Vickers will be announced as the car's driver in a press conference on Friday at DIS.

With two eligible drivers -- Jeff Gordon and David Gilliland -- not participating, Casey Mears and Ricky Stenhouse Jr. will round out the 25-car field for the 75-lap non-points event, based on their position in the final 2015 points standings.

The No. 14 SHR team was originally supposed to be part of the event, but the team's eligibility was uncertain after SHR announced last week that Tony Stewart it out indefinitely with a back injury.

NASCAR executive vice president and chief racing development officer Steve O'Donnell said on Thursday, however, that the No. 14 team would be allowed to participate.