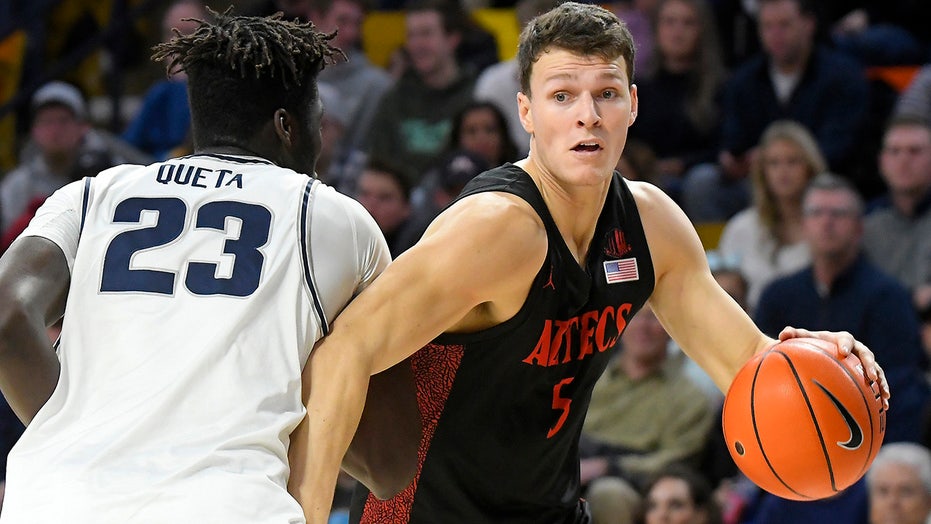 San Diego State basketball is back to being the hottest ticket in town.

Viejas Arena is hopping again because the undefeated and seventh-ranked Aztecs are playing as well as they did during their two Sweet 16 seasons during the last decade, including the one led by Kawhi Leonard.

This time it’s a trio of transfers — guards Malachi Flynn and KJ Feagin, and forward Yanni Wetzell — powering the Aztecs (15-0, 4-0 Mountain West Conference). SDSU and Auburn are the nation’s only undefeated teams.

Besides having the nation’s longest winning streak, the Aztecs are No. 1 in the latest NET (NCAA Evaluation Tool), which replaced RPI as the primary method for NCAA Tournament seeding.

In their third season under coach Brian Dutcher, the Aztecs have won at BYU, beaten Creighton and Iowa on consecutive nights in Las Vegas and beaten Utah of the Pac-12 at Staples Center in Los Angeles. On Saturday night, they claimed a big win at defending MWC champion Utah State.

SDSU has another tough trip Wednesday, when the Aztecs will face Wyoming at 7,220 feet elevation, before returning home to host Boise State on Saturday night.

The public tickets to the Boise State game sold out Tuesday. School isn’t back in session yet, so any student tickets that haven’t been claimed by Wednesday afternoon will go on sale to the public.

“I say this is the best West Coast environment. This is incredible, especially in the state of California,” said Dutcher, who was an assistant when Steve Fisher elevated SDSU from a hoops backwater to national relevance.

“When this building is full it's electric and we've seen it full this year. We’ve seen it full in the past. I'm just excited to get school started again so we get the students back in here to enjoy some of it.”

Dutcher noted that there was a full house on New Year’s Day, when the Aztecs had a noon tipoff and beat Fresno State.

“I always say about San Diego — USC and UCLA, they have great passionate fan bases, but you go up there and they have the Lakers and the Clippers and the Ducks and the Kings, the Dodgers and the Angels and the Rams and the Chargers,” Dutcher added. “For San Diego, we are the pro basketball team, San Diego State. We get all the support and we're very thankful for that. It makes a difference in winning and losing and we're excited when this building is full, and I hope it will be that way for the rest of the year.”

That’s not to say the Aztecs are overlooking Wyoming. They’re not. After beating Utah State, they returned to sea level and then reported for practice Monday to find out they had jumped into the Top 10 for the first time since 2013-14, when they made the Sweet 16 for the second time in four seasons.

Dutcher expects the Aztecs to get the best shot from Wyoming (5-11, 0-4). But he thinks he’s found a way to combat the altitude.

“I know people ask, ‘Why didn’t you just stay on the road?’ I said, ‘I want to get out of altitude.’ We’ve seen that before in this conference when we had travel partners. We used to go BYU-Utah, Colorado State-Wyoming, Air Force-New Mexico. And by that second game, we looked like we were running in quicksand. It was the altitude. We’re trying to diminish the effects by trying to get in there and play within 24-36 hours after arriving. That’s why we came home for two days. Sleep in your own bed and play within 24 hours of arriving.”

The Aztecs are having their best season since 2010-11, when Leonard led them to a 20-0 start and their first Sweet 16 appearance. They lost to eventual national champion UConn and finished a school-best 34-3.

Dutcher and the Aztecs aren’t reaching for comparisons.

“I think if you ask them, they want to go further than that,” the coach said. “You close your eyes and ... we’ve always told kids when we recruit them, ‘Hey, dream of going to a Final Four.’ We don’t want to squash that message and say, the Sweet 16 and that. We just try not to get ahead of ourselves and just get better today.

“Even though we’re 15-0, we don’t feel as if we’re playing up to our potential yet. We have a bunch of guys that listen to their coaches and want to get better, so we have to continue to get better.”

Forward Matt Mitchell agrees. He spent one season at Riverside’s King High — Leonard’s alma mater — before transferring. He doesn’t draw any parallels with this Aztecs team and the one Leonard led.

“I see two different teams,” Mitchell said. “They were a Sweet 16 team, and people talk about Sweet 16, but we’re trying to go further than that. We’re trying to win a national championship at the end. But we’re taking it one game at a time. The goal is to win the next one at Wyoming.”