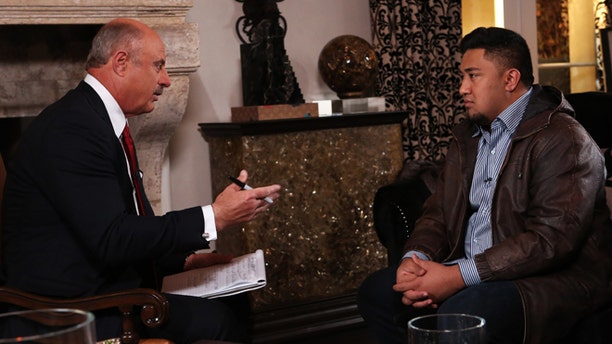 Dr. Phil McGraw says Ronaiah Tuiasosopo, who masterminded the dead girlfriend hoax involving Manti Te'o, told him the Notre Dame linebacker was not involved in the scheme and that he ended up falling "deeply, romantically" in love with the football player.

McGraw spoke on the "Today" show Wednesday, previewing an interview he did with Tuiasosopo, a 22-year-old California man who created the fictional woman Te'o knew as Lennay Kekua. Tuiasosopo's interview with McGraw will air in two parts on the "Dr. Phil Show" starting Thursday.

Since the hoax was revealed earlier this month, Te'o has said the relationship with Kekua started online and eventually became serious, even though the two only talked on the phone and exchanged electronic messages, never meeting in person. Te'o said he was told of Kekua's "death" from leukemia just hours after his grandmother died in September.

McGraw said Tuiasosopo told him the voice of Kekua was his. Tuiasosopo and Te'o have each said that while the Kekua relationship went on for several years, there were times when they weren't in contact.

"There were many times where Manti and Lennay had broken up. But something would bring them back together whether it was something going on in his life, or in Lennay's life, in this case in my life," Tuiasosopo said.

Tuiasosopo said he wanted to end the relationship between Kekua and Te'o before he had to fake Kekua's death.

"I wanted to end it because everything I had gone through, I finally realized that I just had to move on with my life and I had to get me, Ronaiah, I had to start just living and let this go," Tuiasosopo said.

Te'o's publicist, Matthew Hiltzik, declined comment on behalf of Te'o and his family.

When the ruse was reported by Deadspin.com on Jan. 16, the report raised the questions about whether Te'o was involved. The story about how he played inspirationally after the deaths of his girlfriend and grandmother led to an outpouring of support from Notre Dame fans. It became the backdrop to the Fighting Irish's undefeated regular season and run to the BCS championship, where they lost to Alabama.

Te'o won seven national awards for his play and was runner-up for the Heisman Trophy. He has denied any involvement from the beginning, and Notre Dame said an investigation of the player's claims backed up his story.

"The feelings, the pain, the sorrow, that was all real," Te'o told Katie Couric in an interview last week.

McGraw says "absolutely, unequivocally" Te'o had no role in creating the hoax.

Te'o said he first learned that something was amiss when Keuka called him on Dec. 6, and told him she had faked her death.

He told his parents about what had happened while home for Christmas break and called Notre Dame coaches on Dec. 26 to let them know. Notre Dame officials said that they interviewed Te'o and retained Stroz Friedberg, a New York computer forensics firm, to investigate the case. They learned on Jan. 3 that there were no records indicating Lennay Kekua existed.

McGraw said he spent hours with Tuiasosopo and his parents, saying he had a number of life experiences that "damaged this young man in some very serious ways."

"Here we have a young man that fell deeply, romantically in love," McGraw said.

McGraw said he asked Tuiasosopo if he is gay.

"He said, `Well, when you put it that way, yes.' Then he caught himself and said, `I am confused,"' McGraw said.

Te'o also was asked by Couric if he is gay. Te'o said "no" with a laugh. "Far from it. Faaaar from that," he said.

Te'o said in the interview with Couric that Tuiasosopo tweeted him a direct message on Jan. 16, saying he had been behind the hoax. The message read: "I completely accept the consequences to the pain I've caused & it's important that you know the truth before anyone else."

Te'o told Couric that Tuiasosopo later called him and explained what he did.

"He didn't say why. He just explained that he just wanted to help people and that was his way of helping people. Of being someone that he wasn't and trying to connect with somebody on a different level to help them out," Te'o said.

Te'o said he didn't say much to Tuiasosopo.

"I just found that everything that I believed to be my reality wasn't my reality at all," Te'o said.