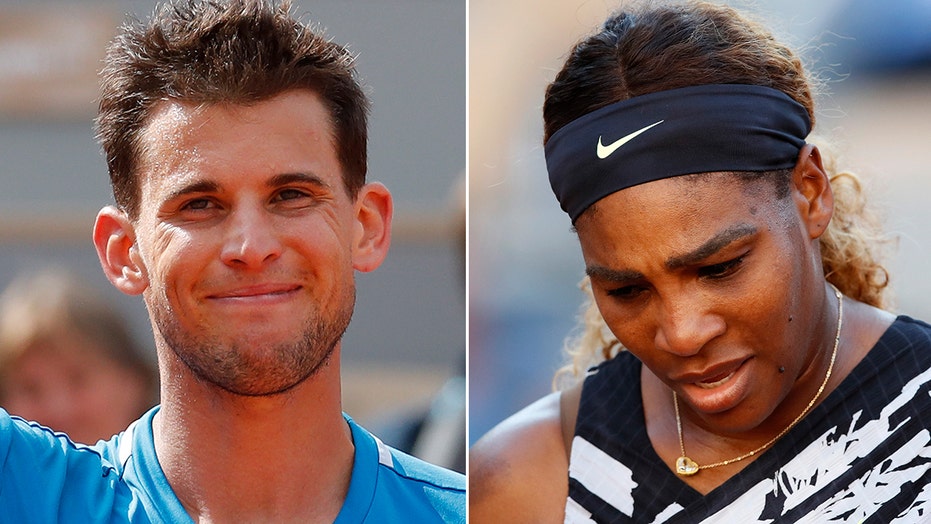 Austrian tennis star Dominic Thiem blasted Serena Williams as having “a bad personality” over the weekend after being booted out of his press conference to make room for the American following her loss at the French Open.

Thiem was addressing the media following his win over Pablo Cuevas on Saturday to advance to the Round of 16 when the press conference was interrupted. When the 25-year-old learned he was being moved to a smaller room to accommodate Williams after her loss to American Sofia Kenin, he fumed: “It’s a joke.”

“I wasn’t angry or frustrated,” Thiem, the No. 4 seed, said during a later interview with Eurosport Germany. “It’s the principle. It doesn’t matter if it is me who sits in there … every player has to wait. It also shows a bad personality in my opinion."

“I’m 100 percent sure [Roger] Federer or [Rafael] Nadal would never do something like that,” the 2018 runner-up added.

Williams had just lost in straight sets to the 20-year-old Kenin in her earliest majors exit since 2014, and purportedly didn’t want to stay any longer than she had to.

STAN THE MAN: WAWRINKA'S 5-SET FRENCH WIN GETS HIM FEDERER

The 37-year-old veteran was waiting for a couple of minutes before she told an official they were being “very rude” and decided to cut her interview short, the Telegraph reported.

Thiem later laughed about the incident in the locker room, according to Roger Federer. (AP)

Roger Federer weighed in on the controversy after beating Leonardo Mayer in straight sets Sunday to advance to the quarterfinals.

"I don't know what went wrong, but something went wrong for this to happen," Federer said. "Maybe they should have kept Serena still in the locker room, not waiting here in the press center. I don't know exactly what happened. I understand Dominic's frustration. I don't think he's mad at Serena or anybody."

"We joked about it," Federer said of Thiem. "That's why I'm very much aware of what happened, and that's why we are laughing in the locker room about it now."

Meanwhile, Thiem secured a spot in the quarterfinals after beating Gael Monfils on Monday in three sets, 6-4, 6-4, 6-2.