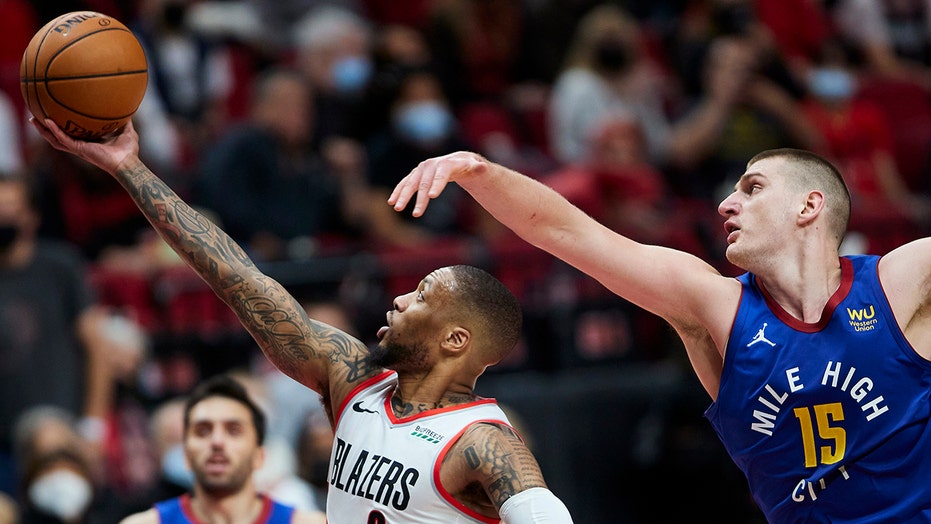 Denver newcomer Austin Rivers stole the spotlight from Nikola Jokic with a fourth-quarter outburst against Portland.

Jokic dominated as usual, with 36 points and 11 rebounds in the Nuggets' 120-115 victory Thursday night over the Trail Blazers. But Rivers propelled Denver to a 2-1 lead in the first-round playoff series.

Signed late last month when the Nuggets were struggling with injuries, Rivers hit four 3-pointers during a crucial stretch in the final quarter and finished with 21 points. Third-seeded Denver had 20 3s overall.

"It feels good. I don’t know how much I can elaborate on that, this feels really good," Rivers said. "This game can bring you the lowest feeling in the world. I swear, some of these nights you feel so low. And this game can make you feel so good about yourself too."

The Blazers struggled from 3-point range and got poor shooting from their bench players despite cheers from the biggest home crowd allowed at the Moda Center this season. Damian Lillard led all scorers with 37 points.

Game 4 is Saturday at the Moda Center.

Denver led 84-79 heading into the final period, but Portland tied it at 91 on Carmelo Anthony's 3-pointer with just under seven minutes to play.

Rivers' third straight 3-pointer put the Nuggets up 102-94 with 3:49 left and his teammates rushed over to celebrate with him as a timeout was called.

The Blazers were hurt when Jusuf Nurkic fouled out with 5:15 left. Nurkic finished with 13 points and 13 rebounds.

Portland pulled within 108-103 after Lillard’s dunk with 1:38 left, but Rivers answered with another 3-pointer that all but sealed it.

"The guy was sitting at home for two and a half months waiting for the phone to ring and it wasn’t ringing. That’s crazy to even think about. Austin Rivers is a good player. He's played in 45 playoff games prior to this 2021 playoffs. It just worked out that he's here," Denver coach Michael Malone said.

Rivers had five 3-pointers overall. Sixteen of his points came in the fourth quarter.

"He won the game, he brought the energy, he scored when we needed," Jokic said. "He was really good."

Sixth-seeded Portland opened the first round with a 123-109 victory in Denver. But the Nuggets adjusted to take Game 2 128-109.

The playoffs have been a scrappy battle for points between Lillard and Jokic. Lillard was averaging 38 points and 11.5 rebounds through the first two games, while Jokic averaged 36 points and 12 rebounds.

Portland made just 14 of 45 3-point attempts in the game.

"I don’t know what’s going to change, but something’s got to change," Nurkic said. "We can’t keep saying ‘Next one.’ And obviously, they made shots but they made shots all game. And if something isn’t working out, we can’t keep jacking up 3s. I believe in this team, but it don’t mean anything if we don’t execute. It’s a long series, but we can’t just assume we are going to win because we are at home."

Denver's playoff record for 3s in a game is 22, set last year in the opening round against Utah.

The Blazers were allowed to increase capacity to a maximum of 8,000 fans for the playoff games at the Moda Center. That was up from the 10% capacity (about 1,900 fans) for the final four games of the regular season.

The Blazers were not happy about the fouls called in the game. Especially Nurkic, who had to head to the bench.

"Gotta trick referees. It’s my fault for getting in foul trouble but at the same time, I can’t agree on all of those. The 4th and 5th fouls, Nikola is a very great player but he grabbed my arm and they call the fouls. Maybe they need four referees out there," Nurkic said.

Nuggets: Will Barton went through pre-game warmups with the Nuggets, but remained out with a hamstring strain. He has missed 16 games. ... The Nuggets went 14-6 over their final 20 road games of the regular season.

Trail Blazers: Back in 2019 when the Blazers downed the Nuggets in seven games in the Western Conference semifinals, Portland won Game 3 with the series tied at 1-1. That Game 3 was an epic four-overtime clash with the Blazers prevailing 140-137.