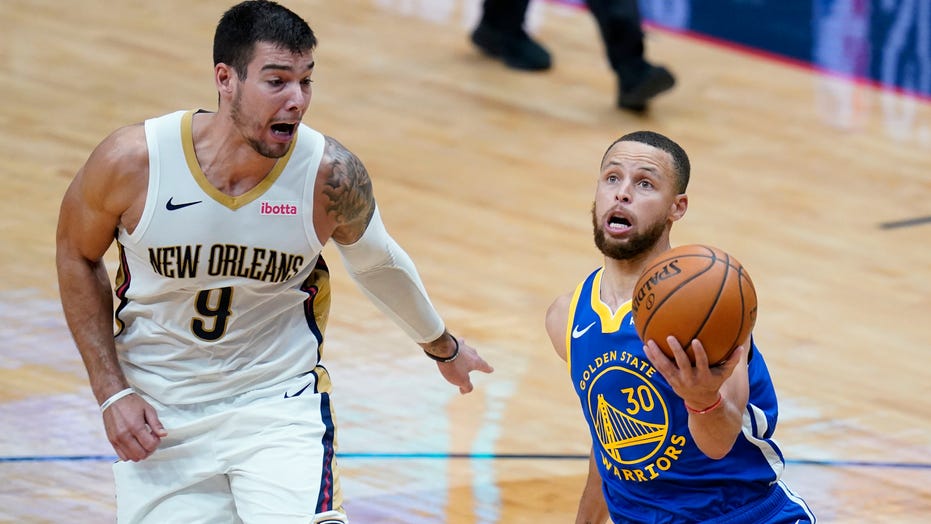 Stephen Curry elicited gasps from the New Orleans crowd with a pair of deep 3s that put the Warriors up by 20 and pushed his point total to 17 — in the first quarter.

Curry's early surge was only the beginning of a 41-point performance. Draymond Green added 10 points, 15 assists and 13 rebounds, and Golden State took a big step toward locking up a postseason berth with a 123-108 victory over the desperate Pelicans on Monday night.

"It's just a matter of staying in the moment, enjoying what I get to do, having the utmost confidence in what I can do out on the floor and just enjoying the challenge because I know I’ve got to play well for us to be who we want to be this year," Curry said. "We’re trying to make this season mean something down the stretch."

The Warriors, who currently occupy a Western Conference play-in position, moved four games ahead of 11th-place New Orleans with seven games remaining. But these teams meet twice more, giving the Pelicans a small measure of hope — if they can figure out how to contain Curry.

How the Pelicans respond is "going to show what kind of character we have as a team," Zion Williamson said.

The Pelicans often looked mesmerized by the Warriors star as he dribbled along the perimeter before snapping off 3-pointers or initiating clever drives toward the rim. His eight 3s included a pull-up from 30 feet.

"Everywhere he runs on the floor, with or without the ball, teams are terrified," Green said. "The guy can take over a game and make it hard for any team in the NBA on any given night."

Andrew Wiggins added 26 points for Golden State, with 10 coming in a key stretch in the fourth quarter.

Williamson scored 32 points and Brandon Ingram added 19 points for the Pelicans, who trailed by as many as 25 in the first half of a game they urgently needed to win.

New Orleans got as close as six points when Willy Hernangomez's short hook made it 79-73 with nearly five minutes still remaining in the third quarter.

That's when Curry led another Warriors surge, highlighted by his step-back 3 from 28 feet that made it 92-76.

With Curry and Green resting early in the fourth quarter, New Orleans still struggled to close the gap. Wiggins scored Golden State's first 10 points of the period, hitting a pair of 3s and a leaning, left-handed layup before tumbling across the baseline.

"Obviously, we were trying to get Steph some rest and Draymond some rest," Warriors coach Steve Kerr said. "We needed buckets and Andrew got three or four big ones to keep them at bay."

Jordan Pool's 3 made it 58-33 before the Pelicans closed the half on a 19-6 run, which included Eric Bledsoe's double-pump pull-up from the top of the key as he was fouled from behind, and Ball's right wing 3 at the horn.

The spurt cut the Warriors' lead to 66-54 and gave the Pelicans hope. That is, until Curry squelched it.

Lonzo Ball’s struggle to produce consistently continued. Two nights after he helped spur an overtime victory in Minnesota, Ball missed 15 of 18 shots against Golden State, going 1 of 9 from deep.

"I think I just missed shots," Ball said. "I’ve been shooting all year. It wasn’t going in today; they’re going to go in tomorrow. That’s the way I look at it."

While Golden State just needed to split a pair of games in New Orleans to stop the Pelicans from gaining ground, Kerr said as the team entered the locker room, Green "was yelling at the guys, ‘We came here to get two.’"

"We obviously needed to come down here and get at least one to hold them off, otherwise they’re breathing down our necks," Kerr said. "But we've got bigger sights ahead. We want to avoid that 9-10 spot and get into that 7-8 spot so we have two cracks at winning one. That's a big deal."

Warriors: Remain in New Orleans to play the Pelicans again on Tuesday night before heading home for their final six regular-season games.