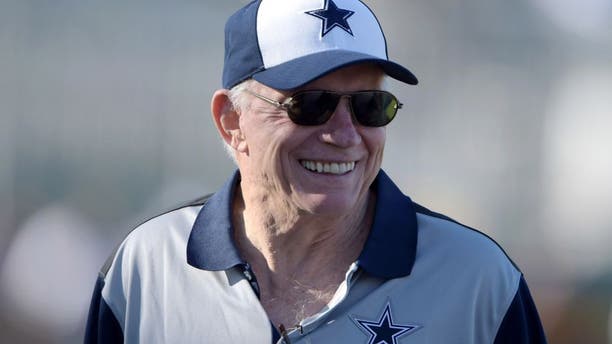 IRVING, Texas (AP) -- Owner Jerry Jones tamped down expectations a year ago when the Dallas Cowboys had plenty of questions and seemingly not very many answers.

Now that they're defending NFC East champions looking for multiple playoff wins for the first time since the last of three Super Bowl wins in four seasons 20 years ago, the ever-optimistic Jones isn't trying to pump up things. Neither is his son.

"No, I think he's been out of that business for a while," executive vice president of personnel Stephen Jones said. "We need to go get something before we can start talking too optimistic. We got a little bit more to prove before we can take that next step."

Tony Romo and Dez Bryant haven't taken a snap in a game together since the All-Pro receiver's crucial catch that wasn't in a playoff loss to Green Bay last January. Same thing for all five members of an offensive line being touted as the key to replacing NFL rushing champion DeMarco Murray, who left for Philadelphia in free agency.

Bryant missed the offseason in a contract dispute and injured his hamstring early in training camp, practicing sporadically after that and missing all four exhibition games. Four of the five blockers battled mostly minor injuries during camp, but all are expected to be ready for the opener Sunday night against the Giants.

"Obviously I would have liked to have had more reps," said right guard Zack Martin, who played just one preseason game because of a neck injury, and is coming off the team's first rookie All-Pro season since running back Calvin Hill in 1969. "But I've got to take advantage of what I've done and take advantage of this week coming up to prepare for New York."

While Murray's franchise-record 1,845 yards rushing played a big role in the most efficient season of Romo's career, Bryant's presence was huge. He led the NFL with 16 touchdowns receiving and is now paid like the receiver off to the best start in franchise history.

The 26-year-old signed a five-year, $70 million contract. Now Bryant has to find a way to reconnect with his quarterback quickly.

"Obviously when Dez Bryant comes back, he's a tough matchup for any team and dictates coverage sometimes," said Romo, who played six series over two games in the preseason. "But when anybody's out, when I'm out, you've got to go execute, and that's all I have got to do."

Things to consider for the Cowboys:

SUSPENDED PAIR: Defensive end Greg Hardy (domestic violence case) and linebacker Rolando McClain (substance abuse violation) will miss the first four games on suspensions. Both will be eligible to return Oct. 11 against New England, and Tom Brady should be there as well after a federal judge tossed his four-game ban.

AFTER MURRAY: Joseph Randle, Murray's backup for two years as a fifth-round pick, will likely be the starter in the opener ahead of Darren McFadden. The top 10 pick by Oakland in 2008 had seven mostly mediocre seasons with the Raiders. Change-of-pace back Lance Dunbar is in the mix, and the Cowboys just traded for Christine Michael, a second-round pick by Seattle two years ago.

YOUNG TALENT: While Hardy is out, Dallas' second-round picks from the past two seasons, DeMarcus Lawrence and Randy Gregory, should get plenty of chances. Gregory, a projected first-rounder who slid because of conduct issues, had a sack in each of the first three preseason games.

WITTEN MILESTONE: Jason Witten, the franchise leader in receptions, needs 57 catches to join Tony Gonzalez as the only tight ends in NFL history with 1,000 career grabs. But he was less of a focal point last season, a trend likely to continue with the number of receiving threats available to Romo.

CORNERBACK CONCERN: A season-ending knee injury to Orlando Scandrick in camp puts more pressure on Brandon Carr, an expensive free agent, and Morris Claiborne, a top 10 pick in 2012, to play better than the past two seasons. Morris missed most of last season with a knee injury. Scandrick's absence also is an opportunity for second-year undrafted player Tyler Patmon in the slot.