Urban Meyer raised eyebrows earlier this year when he said he would take the Dallas Cowboys job if it were available. Two months later rumors have begun to swirl about his potential candidacy.

After the Cowboys’ loss to the Chicago Bears on Thursday night, the NFL Network reported there was “very real interest” in Meyer and that team executive Stephen Jones had spoken with him recently. 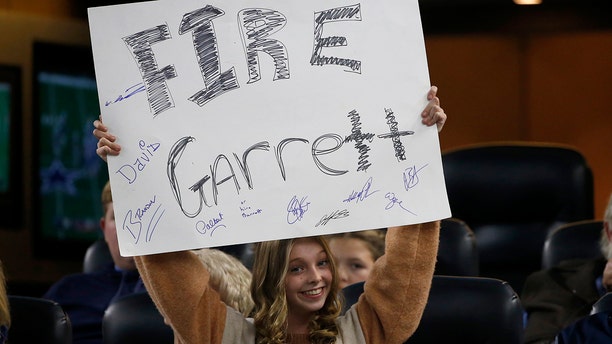 A young fan holds a sign calling for the firing of Dallas Cowboys head coach Jason Garrett in the second half of an NFL football game against the Buffalo Bills in Arlington, Texas, Thursday, Nov. 28, 2019. (AP Photo/Ron Jenkins)

Jason Garrett’s future with the team has been swirling all season long and with Dallas’ latest skid, the noise about his potential dismissal has gotten louder. Cowboys owner Jerry Jones has said Garrett will remain the coach for the remainder of the year but offered a cryptic message earlier this week.

“There is no bar," he told KRLD radio when asked what it would take for Garrett to get an extension. “When I say that I don’t mean that there’s not a level of-- a point where I determine it’s just not working or that I determine that it's working but there’s many things. There’s boxes to be checked.”

He continued: “There’s no exclusive, nobody’s got the exclusive skills to get the job done so that collectively you can win a Super Bowl but they’re qualified people. Jason Garrett is one of them and in my opinion, Jason Garrett will be coaching in the NFL next year.” 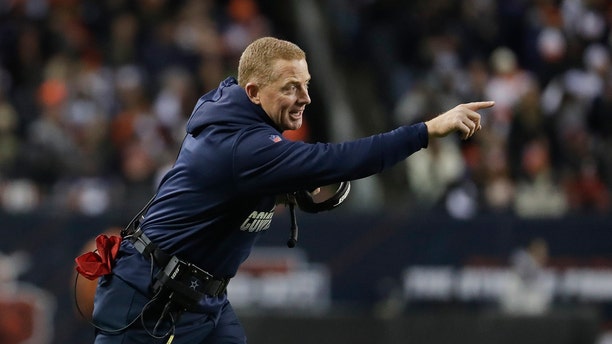 Meyer thrust himself into the spotlight in October when he was asked about the Cowboys job in an interview on FOX Sports’ “The Herd with Colin Cowherd.”

He was asked about Riley’s possible future in Dallas and, when asked whether he would be interested if the Cowboys came calling, he responded: “Absolutely.”

The Bears defeated the Cowboys, 31-24, on Thursday. Dallas is now 6-7 and has dropped four out of their last five games.