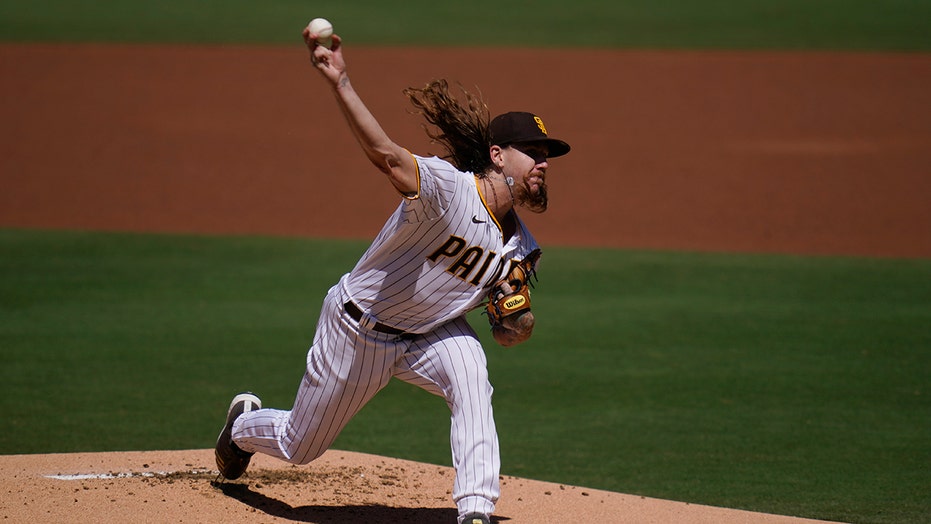 The euphoria of clinching their first playoff berth in 14 seasons three days earlier was tempered for the San Diego Padres when right-hander Mike Clevinger was suddenly pulled after only one inning of his start Wednesday.

Clevinger was sent for an MRI on his right biceps while the Padres were losing 5-2 to the Los Angeles Angels. If the Padres get bad news, it will be a big setback at the front end of their playoff rotation.

Even some of his teammates were confused after Clevinger didn't come out for the second inning.

“It would be a big blow if we lost Clev," first baseman Eric Hosmer said. “I think a lot of us position players were kind of asking the same thing, whether or not he had been scheduled to throw that amount or what was going on. We're hoping for the best news."

“All the things that were said about Clev, he is that," Hosmer said. “He's fit in extremely well with this team. He's getting great with the guys and you can already see him rubbing off on other starters."

Clevinger was obtained in a blockbuster trade with Cleveland on Aug. 31 and had been the presumed Game 1 starter in the wild-card round starting next Wednesday. If Clevinger can't go, that role could go to Dinelson Lamet.

Clevinger breezed through a perfect first inning on 12 pitches, including striking out Mike Trout and David Fletcher.

But rookie Adrian Morejon began warming up in the bullpen while the Padres batted in the bottom of the inning and came out to start the second. Morejon (2-2) allowed a tying, two-run homer to Shohei Ohtani and solo shots to Justin Upton and Anthony Bemboom that gave the Angels a 4-2 lead.

Clevinger’s start had been pushed back from Saturday night because of tightness in his right biceps. Manager Jayce Tingler said on Tuesday that Clevinger threw a bullpen session on Monday and seemed good to go for Wednesday afternoon’s start.

Clevinger said his biceps tightened up after he threw a curveball to Jared Walsh, the second batter, Tingler said.

If the Padres don’t have Clevinger for the playoffs, “We’re comfortable with our options, yeah, but like I said, we’re not going to flip out and freak out,” Tingler said. “We're going to get some information, whether it’s later this evening, and kind of go from there."

The Padres are off Thursday before playing four games in three days at San Francisco to end the regular season. They’ll have two days off before opening the wild-card round. Tingler said the Padres need to balance making sure their starters have enough rest while still getting in any final tuneups as they line up their postseason rotation.

The Padres earned their first playoff berth since 2006 with an 11-inning victory against Seattle on Sunday. They're 0-2 since then, getting swept by the Angels, and their magic number remains at two for clinching homefield advantage as the NL's No. 4 seed in the wild-card round next week.

The Angels entered the day mathematically in the race for the second wild card and for second place in the AL West.

Ohtani's seventh homer went an estimated 430 feet into what's ordinarily a beer deck. Anthony Rendon was aboard on a leadoff walk. Upton then drove a solo shot into the second deck in left, his eighth. Bemboom hit a one-out homer to right, his third.

Parick Sandoval (1-4) went three innings against the lethargic Padres for the win. Felix Peña got the final three outs for his second save, with Trout making a nice diving catch of Mitch Moreland's fly ball to end it.

“It feels good," Sandoval said. “To finally get that first win, it’s been a while."

He is in his third stint with the Angels after being recalled from the alternate training site.

Padres shortstop Fernando Tatis Jr., who has cooled off at the plate during the last two weeks, was given a day off. Tingler said he plans to give other plays days off during the final series.

Angels third base coach Brian Butterfield was ejected for saying something to umpires during a video review in the sixth. The Angels challenged an out call on a diving catch by left fielder Tommy Pham, which was overturned and ruled an RBI single for Fletcher that made it 5-2.

Angels: LHP Andrew Heaney (4-3, 4.02 ERA) is scheduled to start Friday night in the opener of the final series of the regular season at the Los Angeles Dodgers.

Padres: Dinelson Lamet (3-1, 2.07) and Chris Paddack (4-4, 4.23) are scheduled to start in a doubleheader at San Francisco on Friday. The Padres will be the home team in the second game, which is a makeup of a postponement in San Diego on Sept. 12 after Giants outfielder Alex Dickerson received a false positive COVID-19 test.