Kansas City Chiefs defenders will have the difficult task of trying to contain and tackle Tennessee Titans running back Derrick Henry Sunday in the AFC Championship game.

Chiefs safety Tyrann Mathieu told CBS Sports on Monday that in his first meeting with Henry, he tried to tackle the running back and thought he had broken his jaw. Mathieu said attempting to hit Henry was like hitting “solid rock.”

Mathieu played for the Houston Texans during their first two matchups, though Henry wasn’t used as prominently as he was being used during the 2018 season. Tackling the Alabama product isn’t getting any easier for defenders.

MARIOTA HELPING TITANS ON, OFF FIELD DESPITE BEING BENCHED 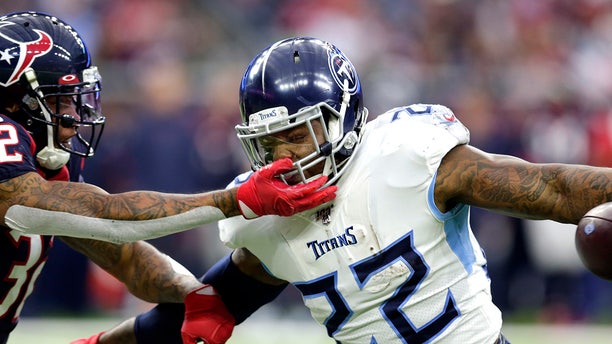 “If you watch a lot of Derrick Henry, he gets stronger as the game goes on. His first halves, they aren’t that great, but second-half football, he takes off," he said. "So we got to be well-rested, hydrated in order to kind of finish the game, try to compete against him and slow him down when it matters the most in the fourth quarter -- four-minute drives, six-minute drives, seven minutes left. I remember last time we played them, it was nine minutes on the clock, they were down by nine and they kept feeding him the ball, so you know that they believe in him.

The two teams play Sunday at 3:05 p.m. ET with a trip to the Super Bowl on the line.