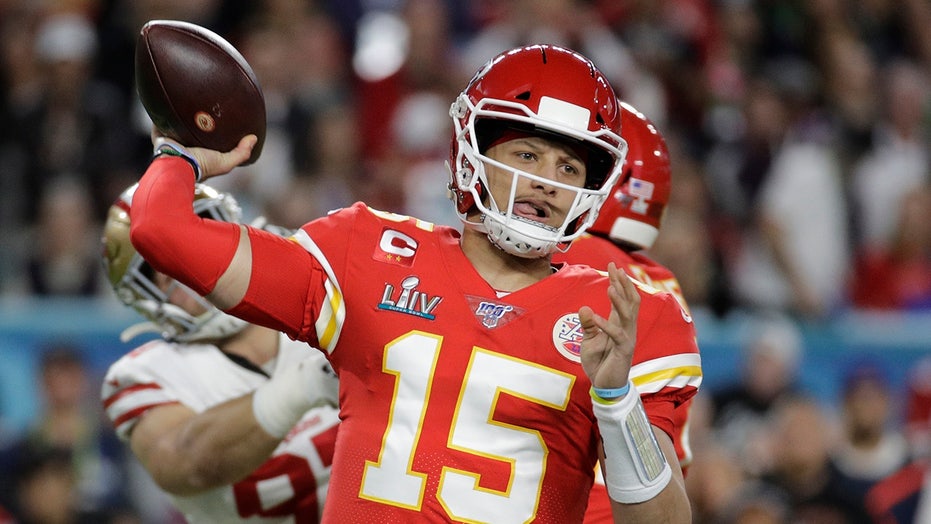 Kansas City Chiefs quarterback Patrick Mahomes was on every call involving the NFL Players Association and took a significant role in putting in place the return-to-play protocols for training camp.

So while he acknowledges “some risk” in returning to the team facility on Saturday, when Mahomes joined rookies and select veterans for the start of his camp, he also felt comfortable in knowing the environment would be as safe as possible.

CHIEFS’ LAURENT DUVERNAY-TARDIF FIRST PLAYER TO OPT OUT OF NFL SEASON: ‘I MUST FOLLOW MY CONVICTIONS’

“I think the NFLPA did a good job getting all the players on the call and being prepared to be in the building and everything that entailed,” said Mahomes, who like the rest of NFL players did the entire offseason remotely. “They're really taking this thing seriously. They're taking social distancing and wearing a mask seriously, so we're not hurting each other or hurting the people out in the community with us being here.”

The Chiefs and Texans, who meet in NFL's regular-season opener, were given the go-ahead to allow rookies to report to training camp last Monday. But the week mostly involved COVID-19 testing for the rookies, and the veterans will likewise go through a similar period of testing before they begin more typical meetings and workouts.

That slow ramp-up is the first part of an acclimation period unique to this season. The players' board of representatives voted 29-3 on Friday to adopt several changes to the collective bargaining agreement that provided for new training camp and roster rules, economics and the protocols for operating amid the coronavirus pandemic. The acclimation period takes the place of four preseason games and prohibits padded practices until the middle of August.

The Super Bowl MVP took over the player representative role on the Chiefs from longtime punter Dustin Colquitt, who was let go in the offseason. But Mahomes said that Colquitt has still been providing him guidance during negotiations.

“I thought the calls went well. There were a ton of questions. They were long but they were worth it," Mahomes said. “I thought they really pushed and got the things that made us comfortable to approve the proposal that was laid out.”

Chiefs offensive guard Laurent Duvernay-Tardif was the first player to voluntarily opt out Friday night. Duvernay-Tardif has been practicing medicine in the fight against COVID-19 during the offseason and chose to remain in Canada and continue in that role rather than returning to Kansas City and helping the Chiefs defend their Super Bowl title.

"“Being at the front line during this offseason has given me a different perspective on this pandemic and the stress it puts on individuals and our healthcare system,” Duvernay-Tardif said. “I cannot allow myself to potentially transmit the virus in our communities simply to play the sport that I love. If I am to take risks, I will do it caring for patients.”

Mahomes said he respected Duvernay-Tardif's decision, even if it means the Chiefs need to break in a new right guard.

“I think it surprises anyone,” Mahomes said, “but at the same time you respect his decision. He's a guy who's been on the front lines and working with people suffering from COVID day to day. He understands it and his decision was to stay there and he wanted to keep helping in that capacity. You have to respect the decision.”

Chiefs coach Andy Reid, whose mother was a doctor, also wasn't surprised by the decision.

“I understand the dedication it takes to be a doctor,” he said. “We're all blessed to have doctors in our lives. They're givers; they're not takers. They're healers. They want the best for you. So Larry has that quality, and you're seeing it to the utmost here. I just think it's tremendous dedication to his profession, what his future is going to be, and mainly to the people he gets to help. So my heart goes out to him.”

Reid was integral in training camps opening next week. The NFL and the players' union asked him to be a neutral voice in the discussion, offering his insights from decades in the business. And after plenty of push and pull by each side, Reid said he's comfortable with the return-to-play plan and looking forward to training camp.