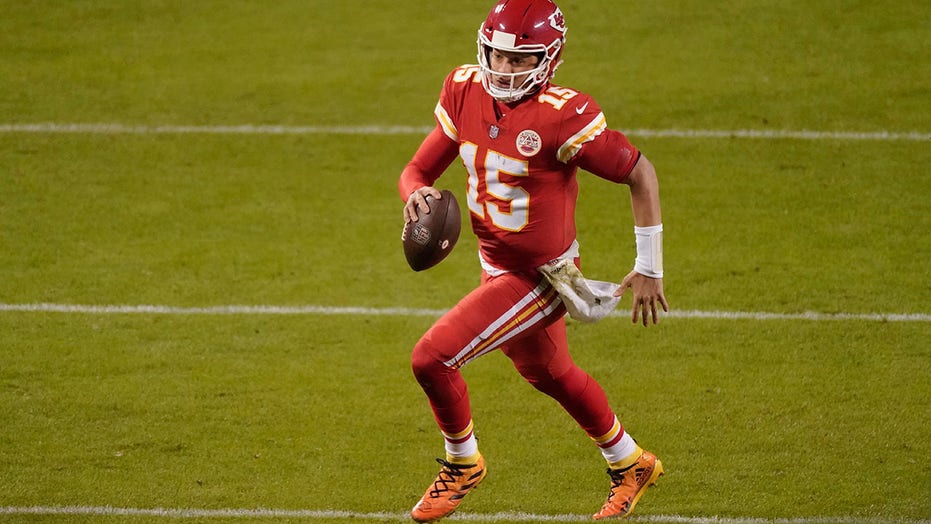 The NFL is making major coronavirus protocol changes, including team facilities shutting down for two days after games; NFL Hall of Fame quarterback Brett Favre weighs in on ‘Fox and Friends Weekend.’

The Kansas City Chiefs, with their star quarterback and seemingly endless playmakers around him, should rightfully feel good about their chances of scoring a touchdown whenever they get their hands on the ball.

Unless they get it in the red zone.

That make-or-break 20 yards closest to the opposing goal line has had the Chiefs seeing red all season, their inability to stuff the ball in the end zone becoming a significant point of concern as they head down the stretch.

They had failed to score a TD on a league-worst seven straight trips before Travis Kelce hauled in Patrick Mahomes' go-ahead pass last week against the Broncos, and even then, the pass was thrown from just beyond the line of scrimmage: the 20-yard line.

That barely counts as the red zone. More like pink or purple.

“I didn’t do a very good job in the red zone of giving the guys opportunities to get themselves in,” Chiefs coach Andy Reid said afterward, "so I’ll go back, I’ll work on that part, and we’ll make sure we put these guys in good position to make some plays down there, whether it’s the run game or the pass game.”

Trouble is neither of them has worked this season.

The Chiefs have scored 41 touchdowns this season, but just 30 of them have come on plays from the 20-yard line and in, including three at the magic mark. There have been just 22 scores inside the 10-yard line and five from the 2 or 1, when it stands to reason that getting into the end zone should be the easiest.

After all, how hard is it to move a football 6 feet? Seventy-two inches?

Yet it's been exceptionally hard for the Chiefs, who despite leading the NFL in total offense by a wide margin have scored touchdowns on just 57.45% of their trips inside the 20, putting them squarely in the bottom third of the league. The past three games have been even worse: one in three trips has resulted in a touchdown.

Those bleak numbers are made worse by the fact Kansas City generates the fourth-most red-zone attempts per game.

“I think it's execution,” Mahomes said. “Whenever we do have the right play we have to find the right guy and hit him and get in the end zone, and when it comes down to it, you have to be tougher and run the ball in there.”

Does that count as Mahomes laying down a challenge to his offensive line and running backs?

One of the problems for the Chiefs has been a revolving door of big guys up front, due primarily to injuries and COVID-19 testing and tracing.

Just two of 10 plays from the 1-yard line this season have gone four touchdowns, and four of the misses came when the Chiefs handed the ball to lead running back Clyde Edwards-Helaire.

“We've had opportunities as far as guys open and me throwing it or running and punching it in there,” Mahomes said, “but as (offensive coordinator) Eric Bieniemy says, you have to be able to run the ball when people know you're running the ball.”

That would be a lot easier than resorting to their seemingly endless supply of trick plays. They've tried double-reverses, wide receiver passes and just about everything else that Reid and Mahomes can dream up this season. Some of them have worked, others have left cynical fans accusing the Chiefs of being “too cute” when they have the ball in the red zone.

“We’re always trying to get better in all these phases. That’s situational football, which is such a big part of the game, obviously and how you do in these areas," Reid said.

"Red zone is pretty important to play, so we’re always looking to bring in new ideas. That’s where we’re at. Some of the things we’ve dialed up this year worked maybe better than in past years. We’ve got to keep going in that area. We can always be better in the red zone.”