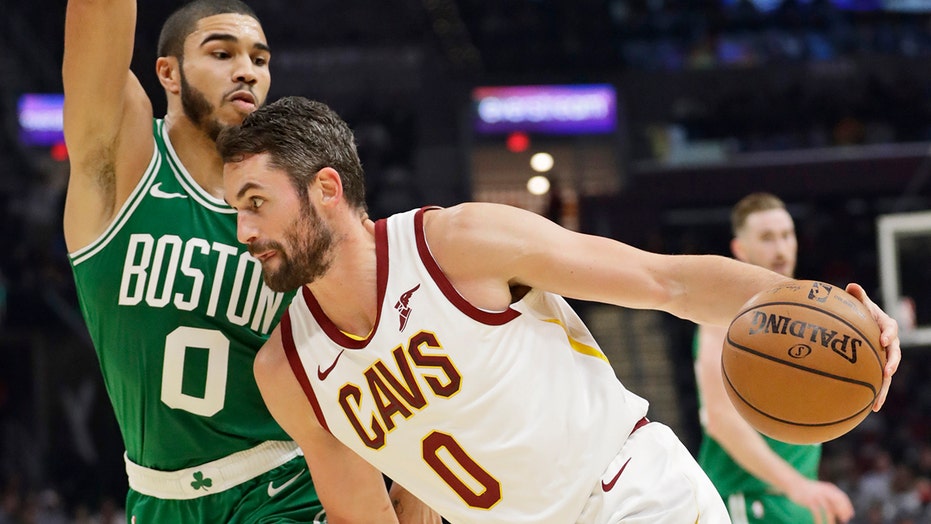 Kevin Love knows he should have better handled his recent frustrations.

The Cavaliers star forward spoke openly and in depth Tuesday for the first time since an outburst on the bench in Toronto last week and for showing up his teammates and coaches during a loss to Oklahoma City on Saturday.

Love threw his arms up in disgust several times on the floor, fired a hard pass in anger and had his back turned on defense as one of the Thunder's players streaked past him for a basket.

Also, before that game, Love got into a verbal exchange with general manager Koby Altman because he was angry at being fined for losing his cool against the Raptors on Dec. 31. Love said the situation was overblown in the media and that he and Altman spoke before Sunday's game against Minnesota and are on good terms.

“I went in there and talked to Koby about it in conversation,” Love said following the morning shootaround as the Cavs prepared to host Detroit. “Came to the arena, Koby and I were great, gave him a (fist) pound right when I came in. There was no altercation, there was no screaming match, you can ask him, that’s what it was.”

Love has been the subject of trade rumors almost since the moment he arrived in Cleveland five years ago, and it's likely the young and rebuilding Cavs will deal him before the Feb. 6 deadline to add future assets.

Not long after LeBron James left as a free agency following the 2017 season, the Cavs signed Love to a four-year, $120 million contract. They wanted him to be the center piece of their rebuild but things haven't gone exactly as planned as the team has made a coaching change and move several veteran players.

Love could be next. But he has no regrets about staying with Cleveland.

“No,” he said when asked if he wished he hadn't signed the deal. "It’s there. Everybody wants to paint a narrative that I didn’t want to be here and just signed it because it was there. No, I’ve always wanted to be here. I don’t know what the next few weeks are going to hold and this has been a frustrating situation and I know this is a team that’s rebuilding and wants to go young.

"I’ve accepted that. Let the chips fall where they may.”

Love has been open in the past about his struggles with anxiety and depression. He's become a national advocate for mental wellness. The stress of the past two seasons have taken a toll, but he said he's learning to cope when faced with challenges.

“I think you have to see all sides of it, and I’ve had to take a step back the last number of years and do that as well,” he said. “Seeing things in their entirety when things are bad, when things are kind of not at a place where you want them to be is super hard. I think that transcends the basketball court, professional sports, any walk of life. I think we can all be better.”

Love acknowledged his failings over the past weeks and vowed to learn from them. He's had a hard time coping with the reality that he's not going to win another NBA title with Cleveland, but that can't affect the ways he acts toward teammates, coaches, fans and media members.

He's a work in progress.

“I’ve been at ease,” he said. ”People ask me, ‘Hey, are you OK?’ and ‘What’s going on?’ I’m like, I’m good. Listen ... I showed my actions on a national level. That was childish of me, and just goes to show you, I’m an unfinished product, like anybody.

"That’s why I speak to you guys not Kevin Love the basketball player, as a human because it’s no B.S. I just want to be authentic. I know I can get a lot better, and that can’t go on here, especially when you have young guys that you are trying to help and I told that I would help.