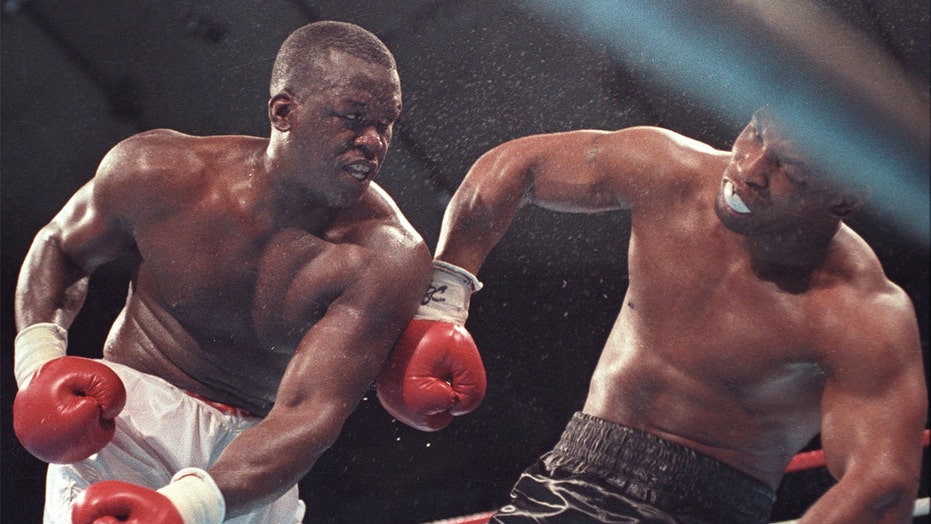 Few upsets shook the core of sports world like the unforeseen knockout of heavyweight champion Mike Tyson at the hands of James "Buster" Douglas.

On Feb. 11, 1990, the pair met up in what was supposed to be a "stay busy" fight for Tyson, whose personal life was making headlines for all the wrong reasons. His marriage to Robin Givens and allegations of domestic violence became tabloid fodder and his association with promoter Don King led to him firing his trainer Kevin Rooney, who had turned the fighter, along with Cus D'Amato, into the most feared man in the sport.

A win against Douglas in the Tokyo Dome in Tokyo, Japan, would set up a lucrative bout between the Brooklyn-bred fighter and Evander Holyfield.

Tyson, who became the youngest heavyweight champ at age 20 in 1986, had spent his career up to that point reeling off stunning early-round knockouts against scared-looking opponents. Douglas was a 42-1 underdog by the only casino that would put up odds on the fight and was not expected to last past the first few rounds.

BOXER GERVONTA DAVIS CHARGED WITH BATTERY OF EX-GIRLFRIEND IN FLORIDA

He'd had shown instances of great potential but had come up short in his biggest fights. From the opening bell, Douglas, whose mother had passed away weeks before the fight, showed no fear of Tyson.

He battered Tyson with punch combinations and slick defense while the champion never mounted a consistent attack. By the end of the fourth round Tyson developed swelling around his eye, which was exacerbated further when his corner lacked an enswell --  a cold steel press used to reduce swelling and is considered a standard piece of boxing equipment.

Douglas continued to win rounds while beating up Tyson. At the end of the eighth, Tyson caught the challenger with a right uppercut, sending him to the canvass. After pounding his fist on the canvass in disappointment, Douglas got up to beat the 10-count.

He proceeded to beat up Tyson some more in the following round. In the 10th, Douglas hit Tyson with a right uppercut that prompted a barrage of punches that sent him down for the first time in his career.

After trying to retrieve his mouthpiece, Tyson was counted out, turning the boxing world upside down. King tried getting the win overturned, arguing that the referee issued a "long count" when Douglas was knocked down in the eighth round and should have been counted out.

Public backlash prevailed and the victory was upheld.

In his next fight, Douglas defended his title against Holyfield. He ballooned in weight and was knocked out in the third round.