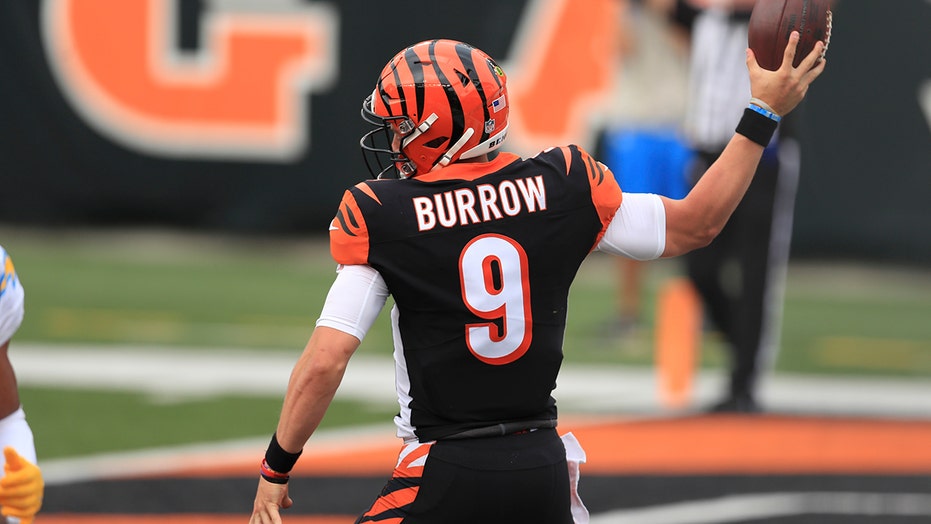 Joe Burrow's childhood was pretty much the same as every other boy raised in football-obsessed Ohio, the NFL's birthplace.

He learned his ABCs and multiplication tables in school. Outside, Burrow got lessons on Paul Brown, Jim Brown, Boomer Esiason, Bernie Kosar, The Ickey Shuffle and Dawg Pound.

On Thursday night, Burrow connects to those roots.

This year's No. 1 overall draft pick, reigning Heisman Trophy winner and just maybe the quarterback to change Cincinnati's fortunes, makes his first road start as the Bengals visit the Cleveland Browns to renew a rivalry Burrow learned about as a youngster.

“I know the history behind it,” he said. "Excited for my first one.”

The 23-year-old's entry into the “Battle of Ohio” also comes on a significant date as it marks the 100th anniversary of the league's start in Canton, where an organization meeting on Sept. 17, 1920 kicked things off.

Burrow's debut last week against San Diego went about as expected. He made mistakes, showed the same resilience that took him from a third-stringer at Ohio State to national champion at LSU, and had the Bengals poised for a possible win. They missed a last-second field goal to force overtime and lost 16-13.

“In my eyes I played terrible through 3 1/2 quarters and then played up to my standards in the last drive and almost won the game,” Burrow said. "I know I’ll be ready for it and I just have to keep that same mindset in the two-minute drill and bring that along for the rest of the season.”

The Browns were searching for any positives after getting blown out 38-6 in Baltimore, a rout that soured any excitement about the team's potential under first-year coach Kevin Stefanski.

It was just one game, but it was a really bad one, and it's put early pressure on Stefanski, who didn't have the benefit of a normal offseason, to get things fixed quickly.

There's also more scrutiny on quarterback Baker Mayfield. He set the tone last week with an interception on Cleveland's first possession, and another uneven performance has raised more questions as to whether he's the long-term answer for the Browns.

Mayfield knows he's got to be better.

“There is a sense of urgency,” he said. “We hurt ourselves very early on in that game. The focus is on eliminating those mistakes and playing our game.”

It will certainly be the smallest crowd in Bengals-Browns history as only 6,000 will be allowed inside FirstEnergy Stadium due to COVID-19 restrictions.

Stefanski said cardboard cutouts and ambient crowd noise created a “strange” environment last week in Baltimore, but he did enjoy hearing some of the banter from players and coaches.

“It does take you back to like a JV high school game,” he said. "But it was is kind of cool also just to hear some of the sounds coming from the field, from our sideline and their sideline.”

One of the Cincy quarterback's biggest issues in the opener was missing open receivers downfield. John Ross and A.J. Green got behind the coverage, but Burrow overthrew them and missed all five deep throws against the Chargers.

“I just have to hit them, that’s all there is to it,” Burrow said.

They seemed on different pages last season, and started 2020 similarly disjointed. Beckham had three catches for 22 yards — his second-lowest career game — against the Ravens despite Mayfield targeting him 10 times.

Beckham said he won't demand more touches as that only reinforces the narrative that he's selfish.

“It’s a tough position to be in with the way that I feel like I’ve been misrepresented to the world,” he said. “It makes it just seem as if I just want the ball, when really I just want to help. I just want to be able to help this team in any way I can."

The Bengals significantly overhauled the NFL’s worst run defense of last season — 149 yards allowed per game —- and had a tough start against the Chargers, who ran for 155. Now it faces a Cleveland offense with Kareem Hunt and Nick Chubb.

“I’d say they can both get 100 yards, either one of them,” linebacker Germaine Pratt said.

The Browns gave Austin Seibert two chances. His next one could be for the Bengals.

Cleveland waived Seibert after he missed a field goal and extra-point try last week. The second-year kicker was claimed by Cincinnati as insurance for Randy Bullock, whose calf cramped on his miss from 31 yards with 2 seconds left last week.

Centennial Plaza in Canton will be dedicated during halftime. More than 25,000 names adorn 11 “Player Pylons” placed in the plaza. Everyone who played a down in an NFL regular or postseason game has been etched into posterity on the pylons’ surfaces.

Centennial Plaza is a public space intended to be open 365 days a year.