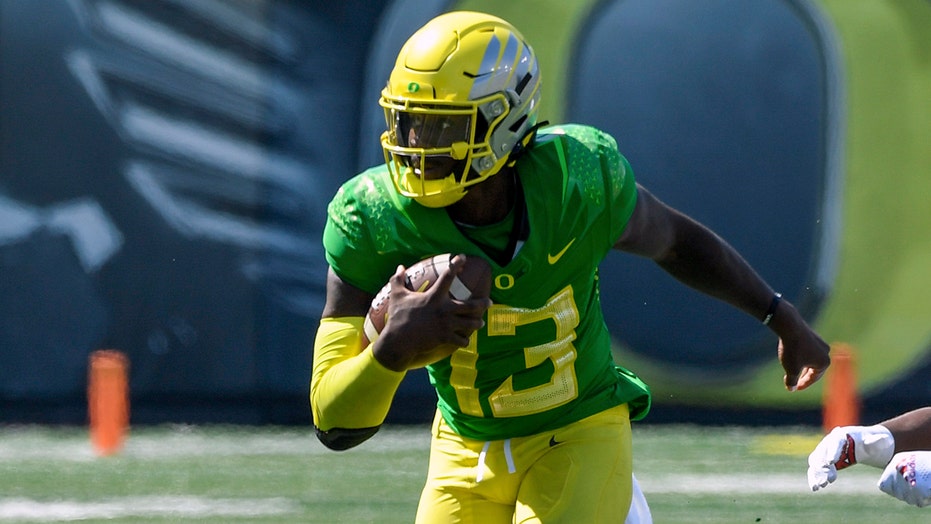 Anthony Brown Jr. was blunt about No. 11 Oregon's offensive struggles against Fresno State.

"It wasn't clean enough," he said.

Brown scored on a 30-yard quarterback keeper with 2:57 left and the Ducks overcame a wobbly season opener with a 31-24 victory over the Bulldogs on Saturday.

Oregon jumped to a 21-6 lead, but Fresno State scored two unanswered touchdowns to tie the game midway through the third quarter, then took the lead early in the fourth on Abraham Montano's field goal.

The performance was somewhat concerning given the Ducks face No. 4 Ohio State next weekend.

"In order for us to go where we need to go, we have to be firing on all cylinders, which we weren’t today. And that was obvious," Brown said. "We’re going to see it on the tape, fix what we need to we need to fix and move on and progress from it."

Brown threw for 172 yards and a touchdown while running for 62 yards and the winner. It was Oregon's 17th straight home-opening victory.

Brown, a sixth-year senior, transferred to Oregon last year from Boston College but was backup to Tyler Shough until getting playing time in the Pac-12 title game and the Fiesta Bowl. Shough transferred to Texas Tech in the offseason.

The Ducks were hurt by the loss of defensive end Kayvon Thibodeaux, who left the game at halftime with a left ankle injury.

Oregon had not played a game at Autzen Stadium for 644 days and the game came amid a surge in coronavirus cases in the state.

Oregon and Oregon State were among the first schools to require proof of vaccination or a negative virus test to attend football games. Gov. Kate Brown also imposed a mask mandate, even at outdoor events.

The game was also marred by smoky conditions from wildfires in the region. Air quality was deemed unhealthy in the Eugene region by the U.S. Air Quality Index.

Fresno State quarterback Jake Haener threw for 285 yards and a touchdown. The Bulldogs (1-1) already started the season with a 45-0 victory over Connecticut.

"We talk about weathering the storm, especially when you go into a hostile environment and the storm hit is pretty hard in the first quarter, and we weathered it," Fresno State coach Kalen DeBower said. "You just get so far behind that it’s catching up, and when you finally take a lead, you have to make a lot of plays to get to that point."

After Thibodeaux sacked Haener and caused him to fumble for a turnover, CJ Verdell ran for a 2-yard touchdown to give the Ducks the early lead.

Another Fresno State fumble led to 4-yard scoring run from Travis Dye to make it 14-0. The duo of Verdell and Dye went into the game with a combined 4,363 rushing yards, most of any retuning pair at the FBS level.

Thibodeaux, widely considered a possible Heisman Trophy contender this season, appeared to injure his left ankle but had it taped on the sidelines and returned before the end of the first half. He came out of the break in street clothes and wearing a boot.

"I know it’s a sprain, which we’re very optimistic that it’s nothing too serious," Oregon coach Mario Cristobal said.

Montano kicked a pair of field goals, from 33 and 39 yards, before Brown found Johnny Johnson III in the end zone with a 32-yard pass to make it 21-6. Jalen Cropper caught a 17-yard touchdown pass from Haener to close the gap for Fresno State to 21-13 just before halftime.

Haener scored from two yards out on a keeper and the conversion tied the game at 21 before Montano's 22-yard field goal with 13:03 left gave the Bulldogs a 24-21 lead.

Fresno State: Fresno State hadn’t played a ranked opponent since 2018. ... The Bulldogs are celebrating their 100th year of football this season.

Oregon: Senior linebacker Dru Mathis left the game in the first half with what appeared to be a left knee injury. ... Oregon leads the series against Fresno State 7-2. The Bulldogs haven’t downed the Ducks since 1982.

Oregon travels to No. 4 Ohio State on Saturday.