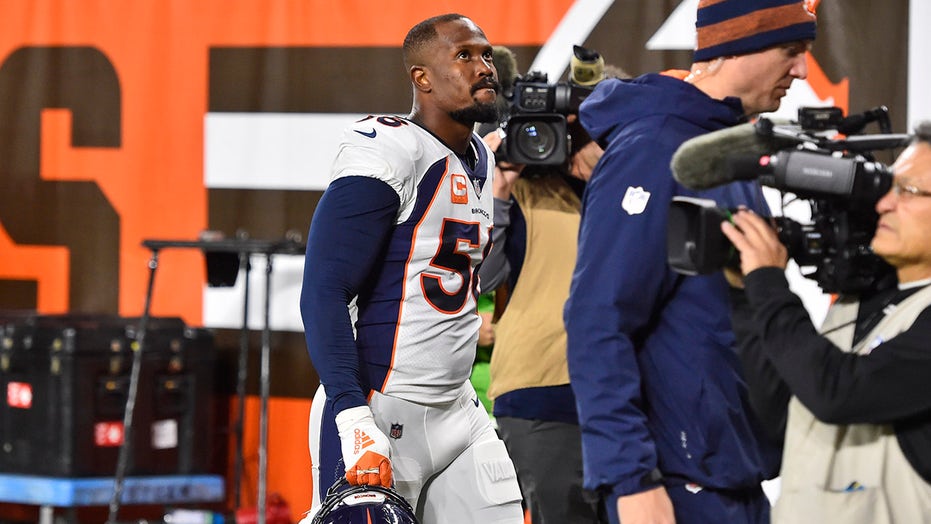 Broncos star linebacker Von Miller suffered a lower leg injury in the first half Thursday night against the Browns and was kept out for the remainder of the game.

One of the NFL's top defensive players, Miller banged his leg into teammate Dre'Mont Jones as he was rushing Browns quarterback Case Keenum with less than two minutes remaining before halftime.

Miller's leg slammed into Jones and buckled inward. He dropped to one knee and asked for medical assistance. Miller left the field under his own power but walked very gingerly to the sideline.

The Broncos said on Twitter that Miller has an ankle injury. Late in the third quarter the team announced he would miss the rest of the night.

The 32-year-old Miller leads the Broncos with 4 1/2 sacks this season and he's the franchise leader with 110 1/2. He missed the entire 2020 season with a dislodged ankle tendon.

Miller is an eight-time Pro Bowler and was the MVP of Super Bowl 50.

Earlier this week, Miller promised he would have a big game against the Browns and essentially guaranteed a Denver win. Miller said he was going to "kill" whatever blocker Cleveland put in front of him.