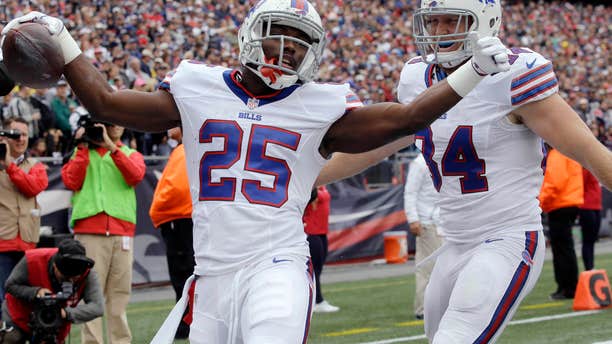 Buffalo Bills running back LeSean McCoy (25) celebrates his touchdown with tight end Nick O'Leary, right, during the first half of an NFL football game against the New England Patriots on Sunday, Oct. 2, 2016, in Foxborough, Mass. (AP)

Buffalo Bills running back LeSean McCoy said Thursday he plans to bring between 15 and 20 local police officers to the game this weekend when the Bills take on the San Francisco 49ers.

McCoy’s plan comes as 49ers quarterback Colin Kaepernick, who has protested during the National Anthem this season to bring attention to what he calls racial injustice by police officers against minorities in the U.S., was recently named the team’s starting quarterback.

McCoy said the gesture wasn’t a direct response to Kaepernick’s kneeling protests. He added that he has no problem with his protest. McCoy said that it has yet to be determined whether the officers will come for Sunday’s game or the Oct. 30 game against the New England Patriots.

The plan to bring officers to the game was being setup through McCoy’s foundation.

“I reached out to them,” McCoy said. “Like I said, it has nothing to do with Kap or the situation. I think that he might be doing the right thing because everybody’s opinion, there’s never a wrong opinion. I think he’s right for what he’s saying we need to do something about what’s going on because it is wrong. Then again, there’s good people and there’s bad people. There’s good cops and bad cops. So I’m just trying to show appreciation.”

McCoy’s gesture comes months after he was involved in a brawl with two off-duty police officers outside a Philadelphia nightclub.