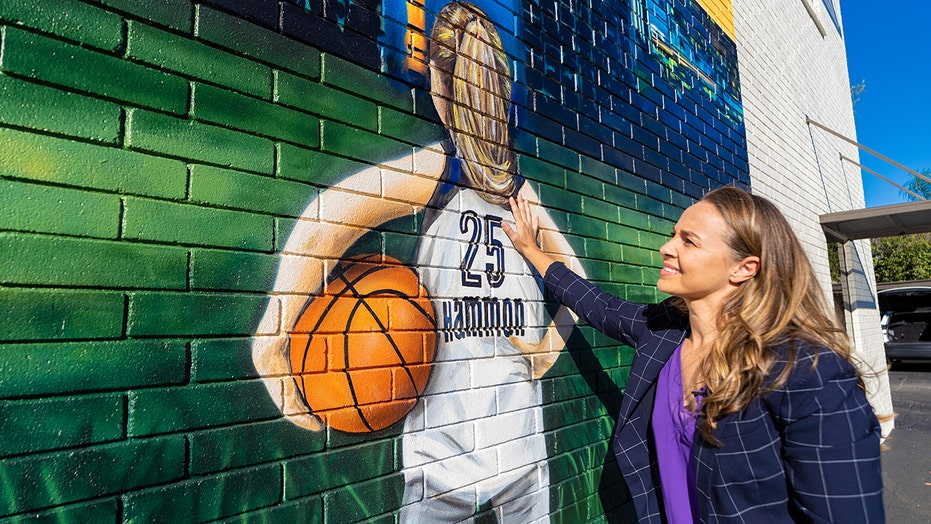 Basketball legend Becky Hammon caught a glimpse of a mural painted in her honor in San Antonio during a short documentary posted on social media Thursday.

Hammon was the first woman to be an assistant coach on an NBA team when she joined the Spurs and Gregg Popovich’s staff prior to the start of the 2014-15 season. Sebastian Boileau painted the mural on the north side of town earlier this month in her honor.

NO FANS AT CHAMPION LAKERS' HOME GAMES UNTIL FURTHER NOTICE

“It’s really moving to see my image and my story captured so beautifully in Sebastian’s mural. And ‘Never Stop’ is both the perfect motto for my drive to take on new challenges and a great metaphor for the adolescent version of myself so poetically portrayed in the piece and so, when I heard that the mural is receiving great feedback not only from the sports world, but also drawing in visits from young women in San Antonio, I was doubly moved. The idea that my career journey can inspire others, regardless of gender, to commit to their own dreams, is extremely powerful,” Hammon said.

The coach’s journey from South Dakota to the NBA was chronicled in “60 Second Docs.” She said in the short feature that she plans on becoming an NBA head coach one day.

“The greatest barriers that I’ve broken are the ones I have in my own mind,” said Hammon, who made the documentary in partnership with Cadillac as part of its Never Stop Arriving campaign. “I’m not gonna stop. I will be a head coach at some point. As I walk through the door, the greatest thing I can do is be the best me I can possibly be and let the next girl walk through behind me.”

Hammon went undrafted when she joined the WNBA in 1999. She played for the New York Liberty from 1999 to 2006 and the San Antonio Stars from 2007 to 2014. She was a six-time WNBA All-Star and a two-time WNBA First Team selection.

She interviewed for the Milwaukee Bucks’ general manager job in 2017 and was rumored to be a candidate for the Indiana Pacers' head coaching job in 2020.