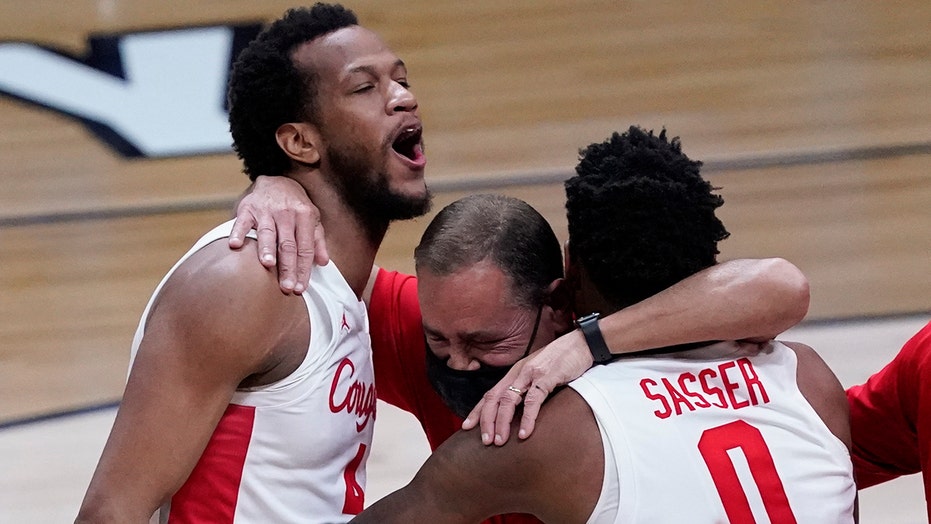 The redemption journeys involving Houston coach Kelvin Sampson and the Baylor program he faces at the Final Four on Saturday have roots in far-from-comforting places — courtrooms, prison cells, the NCAA compliance office.

They are vastly different tales, one about a coach, Sampson, kicked out of the sport and labeled a serial cheater, the other about the near-destruction of a program tainted by murder, rule-breaking and a cover-up.

But they are similar, too, in how much work the protagonists were willing to take on to pick up the pieces and start over. The latest reward is this trip to the Final Four, a destination that seemed nothing short of fantastical when these journeys began.

"I felt led to come here," Baylor coach Scott Drew said when recounting his decision to take over a program that had sunk lower than low when he became coach in 2003. "I really believed in the vision of the school, from the president and the administrators during that time and what they wanted Baylor to continue to grow and become."

It was hard to see it then.

The Baylor scandal began in the wake of the 2003 murder of player Patrick Dennehy, who was found shot and buried in a gravel pit in Waco, Texas. A teammate, Carlos Dotson, eventually pleaded guilty to the murder.

In the aftermath, an NCAA investigation uncovered a sordid laundry list of transgressions, punctuated by an investigation into improper payments to Dennehy, and then coach Dave Bliss's made-up story of Dennehy really having earned the money by dealing drugs.

The NCAA stripped away scholarships, made Baylor skip its non-conference schedule for a season and put it on probation through 2010. Four players left, and when Drew arrived in 2003 to pick up the pieces, he barely had a program: seven scholarship players and three walk-ons were all that were left.

"Obviously once we got into the season and you found out that most of your team were walk-ons and most of them weren’t over 6-2, then you realized it might be tougher than you originally thought," Drew said. "But the goal was always to build a program that could consistently compete and have an opportunity to play in March."

Among the believers was Sampson, who knew Drew to be an up-and-comer after he took over for his father, Homer, for a year at Valparaiso.

"These days, Baylor was lucky to get a coach as good as Drew,″ Sampson said after the hiring while he was nearby, reaching a peak at Oklahoma.

Sampson took the Sooners to the Final Four in 2002 and back to the Elite Eight a year later.

But he ran into a multitude of NCAA problems, both at Oklahoma, then at his next job with Indiana. Most centered around hundreds of impermissible phone calls to recruits. By 2008, Indiana was on probation and Sampson had been kicked out of the game, handed a "show-cause" penalty from the NCAA that would bar him for five years.

Many of the lines Sampson stepped over then would not be considered NCAA violations today. Ousted from the college ranks, he essentially went on a rehab tour for six years as an assistant coach in the NBA. He didn't envision returning until the Cougars — a team with a colorful history punctuated by the "Phi Slama Jama" years in the '80s but not much in the present — came calling in 2014.

"I was angry after Indiana," Sampson said in a 2019 interview with The Washington Post. "I was angry at myself. I blamed myself. I was mad about how it all went down. I had a lot of emotions, but I also had a wife and a family. I had to take care of my family. That was my No. 1 goal. I’ve always said this to them and to a lot of people: You’re not a loser in anything until you quit. Don’t quit."

Now, Sampson finds himself back on college basketball's biggest stage, 19 years after his last visit. He is living proof that if you work hard and know your job inside and out, there is almost always a second chance looming somewhere.

He will be seeking a title game berth just an hour's drive up the highway from the scene of his lowest moments at Indiana. He revived his own career and, in doing so, built Houston back from the ground up. When Sampson took over, the once-proud program had made one NCAA Tournament appearance over the previous 22 seasons.

"Once we got through the first year, we just started adding pieces," Sampson said. "We weren’t in a hurry. We didn’t try to cut any corners. We did it brick by brick."