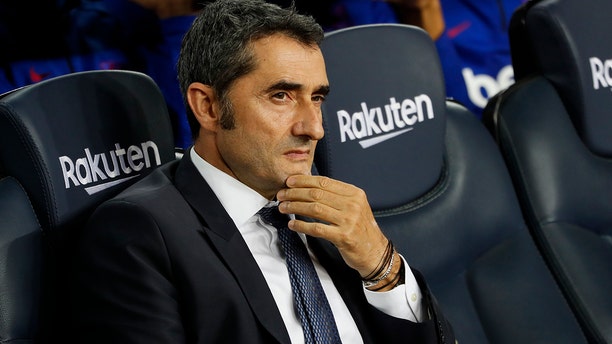 Barcelona coach Ernesto Valverde says his team wants to play its Spanish league "clásico" match against Real Madrid at home despite a planned separatist rally in the Catalan capital on the same day.

The Spanish soccer league wants the Oct. 26 game to be moved from Barcelona to Madrid because of security concerns, with the return match automatically switched from Madrid to Barcelona.

Valverde said Thursday he and his players prefer to keep the schedule unchanged and show everyone that the game can take place safely despite the current problems in Catalonia.

The region has seen violent protests for the last few days with police clashing with protesters angered by a Supreme Court decision to sentence nine separatist leaders to prison. Separatist groups have called for supporters to rally in Barcelona on the day of the match.

There is also discussion about postponing the game instead of switching it to Madrid, but that could potentially cause a scheduling conflict with other competitions.

The Spanish soccer federation said the clubs have until Monday to respond to the league's request to change venues.

The league runs the top two tiers of Spanish soccer, while the federation controls regulations and fixtures for professional and amateur games.

Catalan independence flags are a regular feature at Barcelona's home games at the Camp Nou Stadium.