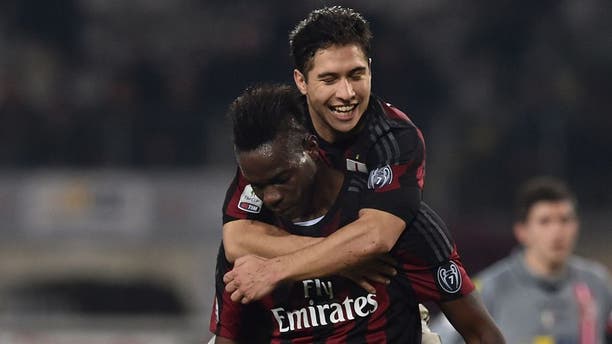 TURIN, ITALY - JANUARY 26: Mario Balotelli (C) of AC Milan celebrates after scoring the opening goal from the penalty spot with team mate Jose Mauri during the TIM Cup match between US Alessandria and AC Milan at Olimpico Stadium on January 26, 2016 in Turin, Italy. (Photo by Valerio Pennicino/Getty Images)

Getting his first start after several months out with an injured pelvis, Balotelli calmly scored from the spot shortly before halftime after Luca Antonelli was fouled inside the area as he slalomed between defenders.

As usual, Balotelli did not celebrate.

A few minutes earlier, Balotelli wasted a great chance after being set up by Keisuke Honda with only the goalkeeper to beat.

Milan substitute M'Baye Niang, who replaced Balotelli midway through the second half, hit the post near the end.

The match was at Turin's Stadio Olimpico because the stadium in Alessandria, outside Turin, wasn't big enough.

It's the first time a third-division club has reached the last four since Bari 32 years ago. Alessandria eliminated Serie A clubs Palermo and Genoa.

Juventus hosts Inter Milan in the other semifinal on Wednesday.

The return legs are scheduled for March 1, 2 or 3.