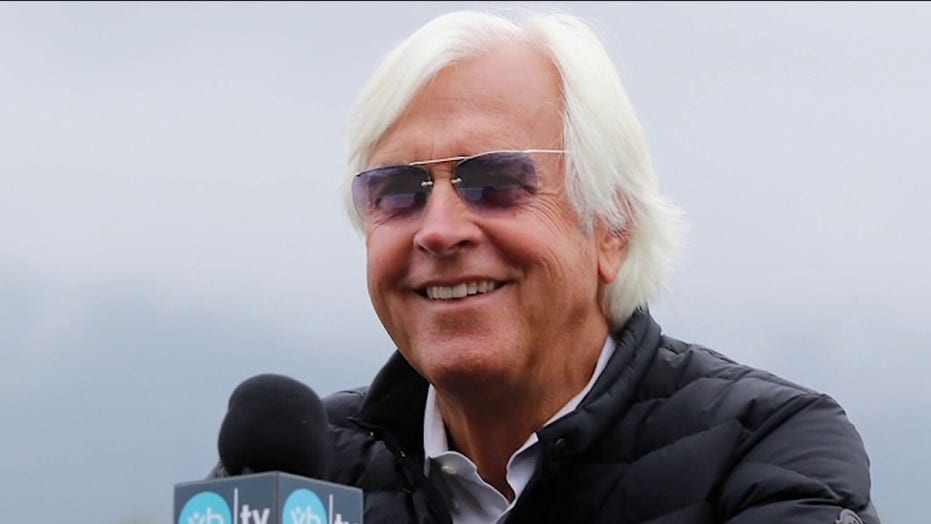 Fox News' Alex Hogan reports live from the Belmont Stakes, detailing what's in store for the third day of competition

The New York Racing Association has charged Bob Baffert with detrimental conduct and scheduled a hearing for the two-time Triple Crown-winning trainer to respond to those allegations.

Baffert was suspended by NYRA in May for Kentucky Derby winner Medina Spirit failing a postrace drug test, and he sued to get the suspension lifted. A New York federal judge nullified the suspension in July on the grounds that NYRA acted unconstitutionally by failing to let him adequately respond.

FILE - John Velazquez riding Medina Spirit crosses the finish line to win the 147th running of the Kentucky Derby at Churchill Downs in Louisville, Ky., in this Saturday, May 1, 2021, file photo. Bob Baffert’s lawyer said Wednesday, June 2, 2021, that a split-sample test of Kentucky Derby winner Medina Spirit came back positive for the presence of the steroid betamethasone, which could lead to the horse’s disqualification and discipline for the Hall of Fame trainer.  (AP Photo/Jeff Roberson, File)

In a letter dated Sept. 9 and signed by Racing Committee Chairman Stuart Subotnick, NYRA charged Baffert with conduct detrimental to the best interests of racing, health and safety of horses and jockeys and the organization’s business operations.

"NYRA has a responsibility to protect the integrity of the sport of thoroughbred racing," NYRA President and CEO Dave O’Rourke said in a statement. "We are determined to ensure the actions taken in furtherance of that goal comport with the requirements of due process, which is what the hearing rules and procedures established by NYRA provide."

The Kentucky Horse Racing Commission has yet to render a final verdict as part of its investigation into Medina Spirit testing positive for the steroid betamethasone. Churchill Downs suspended Baffert for two years.

When Baffert’s suspension was nullified in July, attorney Craig Robinson said, "Bob Baffert and NYRA have had a good relationship in the past. My hope is that they can get to that point again for the overall good of horse racing."

Baffert saddled a handful of horses at Saratoga this summer after his suspension was nullified, including filly Gamine winning a $500,000 race Aug. 28. NYRA’s letter to Baffert includes reference to Gamine testing positive for betamethasone in the 2020 Kentucky Oaks, which led to her disqualification and forfeiture of the $120,000 of purse money.