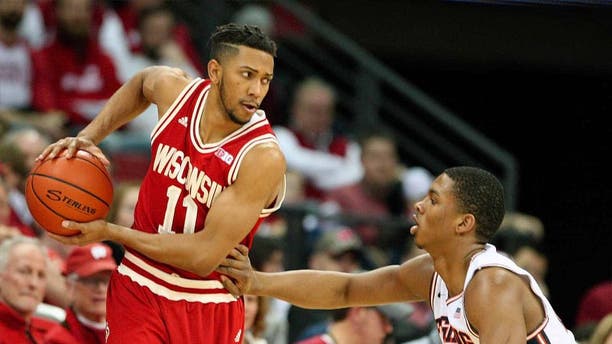 Wisconsin Badgers guard Jordan Hill looks to pass as Illinois guard Malcolm Hill defends during the first half at the Kohl Center in Madison, Wis., on Sunday, Feb. 21, 2016.

MADISON, Wis. -- Ethan Happ had 20 points and 12 rebounds, and helped spark a 17-0 run that allowed Wisconsin to roar back from a double-digit deficit in the second half of a 69-60 win on Sunday night over Illinois.

Happ, an athletic 6-foot-9 freshman, had three steals during the decisive run for the Badgers (17-10, 9-5 Big Ten), who avoided a potentially damaging loss to their NCAA tournament resume.

Wisconsin rallied from a 13-point deficit with about 12 minutes left. It was the team's best comeback win since overcoming a 15-point deficit in the second half at home to an unbeaten and No. 1 Ohio State on Feb. 12, 2011.

Nigel Hayes scored 13 of his 17 points in the second half after being held without a field goal in the first half.

Malcolm Hill scored 20 points and Kendrick Nunn added 15 for Illinois (12-15, 4-10). The high-scoring duo hit all the tough shots until the Illini became unglued in the second half.

Illinois went more than seven minutes of the half without a field goal, and coach John Groce appeared unhappy at times with the officials with a foul disparity favoring Wisconsin.

The Illini were whistled for 19 fouls in the second half to seven for Wisconsin.

Happ, Hayes and guard Bronson Koenig seized on almost every opportunity, a stark contrast to the first half. The Badgers shot 8 of 28 from the field and 1 of 13 from the 3-point arc before halftime, and the slump stretched early into the second half.

Michael Finke finally ended the Badgers' surge with a dunk with 5:09 left to get Illinois within 50-48.

But in between, the Illini missed six field goals, two foul shots and committed turnovers on four straight possessions.

Urged on by a raucous Kohl Center crowd, the Badgers would never relinquish the lead.

Illinois: The Illini last won in Madison in 2010. . . . Groce's team was looking for consecutive Big Ten wins for the first time since closing out last season's home schedule with victories over Northwestern and Nebraska.

Wisconsin: The Badgers extended their home winning streak to five games. . . . Koenig finished with 14 points. Wisconsin finished the night shooting 19 of 44 (43 percent) and 5 of 20 from 3-point territory.

Illinois hosts No. 22 Indiana on Thursday.

Wisconsin visits No. 4 Iowa on Wednesday.