Morrison took to Instagram and claimed that each major-league team is doing some kind of sign-stealing and that the Astros started their scheme before Alex Cora – who was implicated in the ruling – became the team’s bench coach. He also said he knows that the New York Yankees, Los Angeles Dodgers and the Boston Red Sox have also used film to “pick signs.” 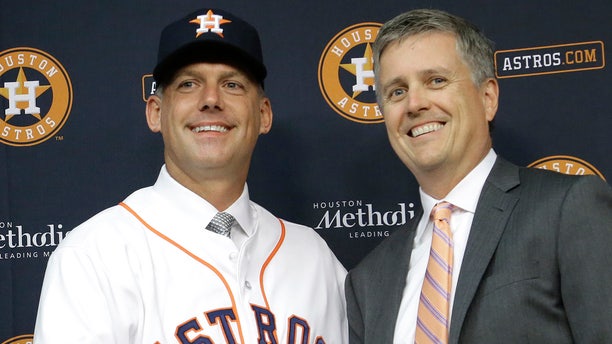 Hinch and Luhnow were fired Monday, Jan. 13, 2020, after being suspended for their roles in the team's extensive sign-stealing scheme from 2017. (AP Photo/Pat Sullivan, File)

“Hello fans. Just wanted to take some time to educate everyone on this sign stealing ‘scandal’ we have going on. This is all something I have witnessed or heard. So many teams are doing this. Exactly how many… I’m not sure.

“The Manfred report that came out is straight FAKE news. This started in Houston well before [Alex] Cora got there. I was playing in Seattle in 2014 and every time we went into Houston you would hear this banging. No one put two and two together. Seattle fans may remember we came with in a game of going to the playoffs. Felix should have won a CY young that year. But couldn’t get pasted [sic] the 5th in Houston.

EX-ASTROS GM JEFF LUHNOW DENIES KNOWING OF SIGN-STEALING SCHEME: 'I AM NOT A CHEATER'

“I know from first hand accounts that the Yankees, Dodgers, Astros and Red Sox have used film to pick signs. Just want you guys to know the truth. I personally think it’s a tool in a tool belt to pick signs, but if we are going to be punishing people for it. Don’t have a— it."

Morrison, 32, has played for the Miami Marlins, Seattle Mariners, Tampa Bay Rays, Minnesota Twins and Philadelphia Phillies. He has been known to be one of the more outspoken major leaguers on social media. He signed with the Milwaukee Brewers earlier this month.

Hinch and Luhnow were fired after the sign-stealing ruling came down. Cora awaits his punishment, which some believe could be harsher because he’s involved in a video-replay scandal of his own as manager of the Red Sox.