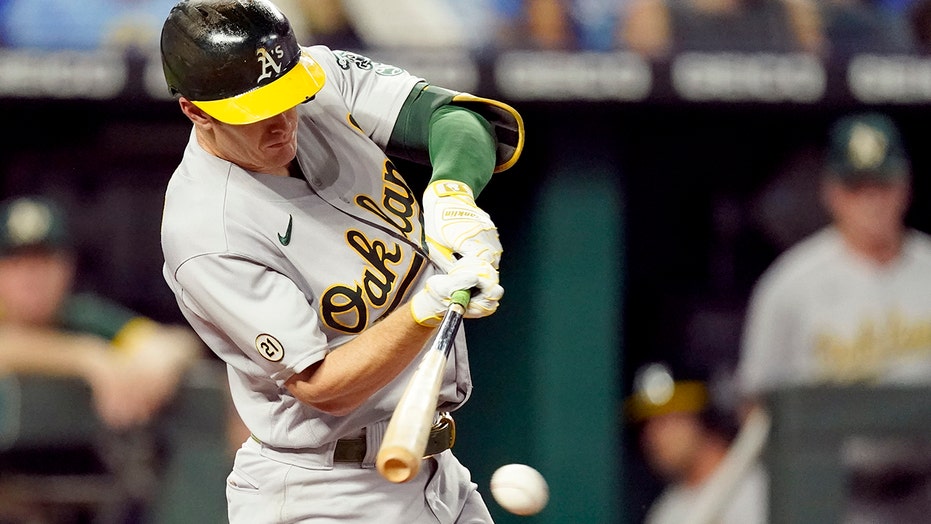 Matt Olson hit a two-run homer, Josh Harrison drove in three runs and Elvis Andrus had four hits as the Oakland Athletics held on through a nervy ninth inning to beat the Kansas City Royals 12-10 on Wednesday night.

The A's ended a three-game skid and remained 3 1/2 back of Toronto, Boston and New York in the AL wild-card chase.

Oakland's Sean Manaea (10-9) was far from flawless against his former team, allowing five runs in five innings. And their beleaguered bullpen coughed a run in the seventh, three more in the eighth and loaded the bases with no outs in the ninth before Andrew Chafin finally managed to lock down the win.

Chafin surrendered an RBI groundout, struck out Kyle Isbel and retired Ryan O'Hearn with the bases still loaded to pick up his fourth save.

"No gray hairs, amazingly," A's manager Bob Melvin said. "It's probably been as tough a stretch on one side as I can remember, but you always have to be optimistic that we're going to ride through that and get it all together at the right time. We have to enjoy a win tonight and not turn it into a defeat because it got dicey at the end."

Mark Canha and Tony Kemp also drove in runs off Carlos Hernandez (6-2) and the beat up Kansas City bullpen.

Salvador Perez hit his 44th homer in the fifth inning for Kansas City, moving into a tie with Shohei Ohtani and within one of big league leader Vladimir Guerrero Jr. It also was the 196th of the affable catcher's career — all of them with Kansas City — putting Perez one behind Mike Sweeney for second on the club's career list.

"When we were down, I mean, at that point all you can ask for is to give yourself a shot," said the Royals' Andrew Benintendi, who went 5 for 5 and drove in four runs. "In those situations it's easy to fold. We fought back and had a shot."

The Royals were charged with only one error — officially — but they made plenty of blunders.

Benintendi was caught in a rundown rounding first base after his RBI single in the first, ending what was shaping up to be a promising inning. Then in the third, fill-in third baseman Hanser Alberto failed to tag out Olson at second base for what should have been a double play — Olson later scored on Canha's hit.

Olson did more damage with two out in the fourth, when he sent Hernandez's 2-2 pitch scraping over the left field wall and into the visiting bullpen. It was his 35th homer of the year and staked Oakland to a 5-1 lead.

Manaea made a mess of the fourth, surrendering three straight hits, a walk and another base hit as the Royals pushed three runs across. But thanks to a sterling snare by Harrison on Edward Oliveras’ bounder down the third-base line, they turned an inning-ending double play and held their 5-4 advantage.

Unlike the previous night, though, Oakland wasn't about to squander another big lead. Harrison drove in a couple runs in the fifth and the A's proceeded to pound a Kansas City 'pen that went eight innings in the series opener.

"We just got behind the 8-ball right there. We got into a tough spot," Royals manager Mike Matheny said. "When you give up as many runs and hits as we gave up, you don't even expect to be in that game and we were."

LHP Mike Minor was placed on the injured list retroactive to Sept. 13 with a shoulder impingement. Minor, who is 8-12 with a 5.05 ERA in 28 starts, has been dealing with the issue for a while and the Royals decided to give him a rest.

"It was barking a little bit," Matheny said, "so we were able to shift around the guys."

Athletics RHP Chris Bassitt (facial fracture) threw a bullpen session Wednesday and plans to throw to batters Saturday in Anaheim. It has not been decided whether he will need a rehab assignment. ... 3B Matt Chapman (bruised left leg) remained out of the lineup after fouling a pitch off himself Saturday. "There's a couple different spots which is making his foot kind of lock up," Melvin said, "to where he doesn't move very well."

The A's turn to RHP Paul Blackburn (0-2, 5.24 ERA) for the series finale Thursday afternoon. Royals LHP Daniel Lynch (4-4, 5.37) tries to continue a late-season breakthrough when he makes his first career start against Oakland.